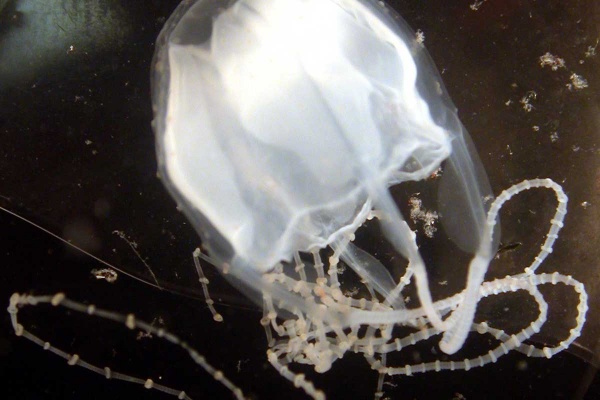 Beach managers in the Western Australian town of Broome are hoping a mapping system which could predict the arrival of deadly jellyfish blooms will make their jobs easier.

For years swimmers in the tropical north have feared being stung by potentially lethal jellyfish species like the irukandji.

Irukandji can deliver an extremely painful and potentially life-threatening sting, and are known to bring on an impending feeling of doom in their victims.

Australian Marine Stinger Advisory Network director Dr Lisa-Ann Gershwin, who has been stung by irukundji twice, has been working towards a model which will use environmental conditions and recent trends to predict when there are likely to be more stingers in the water.

She hopes authorities will one day be able to warn swimmers in advance, reducing the number of people stung around the world.

“From my perspective the things we need to nail down the most are how to predict when and where the irukandjis are going to occur, and how best to communicate with the public about how to be safe in a good, positive way so that people aren’t afraid,” Dr Gershwin said.

The Broome area is home to about 30 jellyfish species, most of which are harmless.

It is currently the only way to tell what lies beneath the surface.

“We regulate the opening and closing of the beaches if there’s a risk to users,” he said.

After each drag net exercise, lifeguards note the types of jellyfish present, the time of day, the tidal movements, and the weather patterns.

“At the moment there’s not a great deal of knowledge about jellyfish generally in Western Australia, and particularly up in this part of the world,” Mr Matson said.

“To increase that body of knowledge is a massive benefit for us and hopefully we’ll get to the stage where we can have a predictive mechanism, so we can predict when the bad times for stingers are going to be.”

Mr Matson said it had been a quiet couple of years in Broome, with about six irukandji stings in the past wet season.

However all of them had occurred in Roebuck Bay, not Cable Beach.

He said there was a misconception that you could not get stung in “dry season”, and people needed to be aware of the risks all year around.

However he said the actual number of irukandji stings at Cable Beach in winter was low.

Mr Graffen said vinegar was still the recommended treatment for stings, but he warned people providing treatment to be careful.

“People dealing with these stings are in danger of being stung themselves, but [the treatment is] flushing with vinegar for thirty seconds, denaturing the nematocysts that are envenomating the individual”.

Dr Gershwin and her colleagues are also working on the release of a jellyfish app, which helps identify types of the animals around the world.