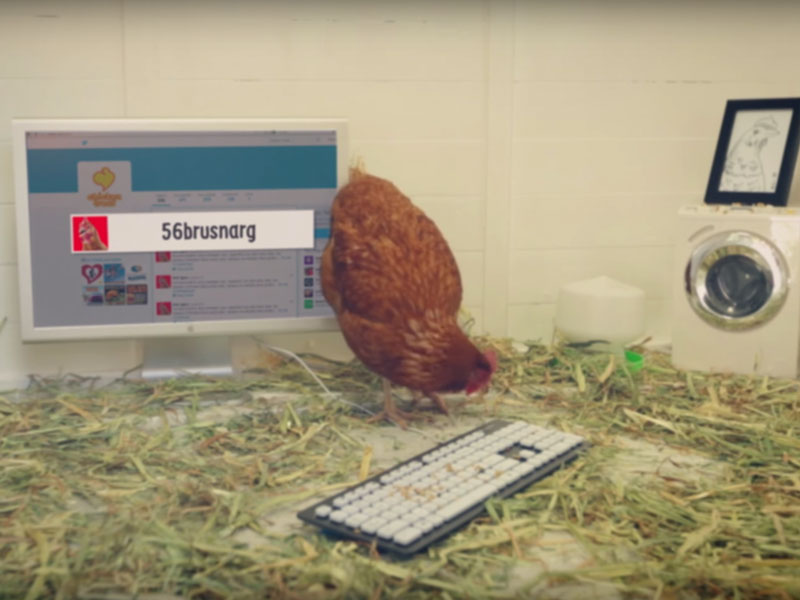 Betty the Chicken is pecking away in a barnyard-inspired office with the aim of breaking a Guinness World Record.

Although the odds are stacked against her – as is her lack of hands and inability to see her feet – Betty hopes to become the first of her species to tap out a five-letter word in English.

West Australian fast food chain Chicken Treat took it upon itself to train Betty and track her progress through a marketing campaign on Twitter.

But two-year-old Betty was a bright spring chicken, and didn’t need much directing to spread her literary wings.

“She has done a four-letter word and a couple of three-letter words – ‘look’, ‘see’ and ‘poo poo’ – I’m not quite sure whether she is trying to send us a message,” Chicken Treat CEO Mimma Battista told The New Daily.

But, so far, Betty’s put in a pretty poultry – sorry, paltry – effort. But some have questioned the ethics of keeping a chicken chained to the keyboard.

“She deserves better. Let her go to a home, what a disgusting stunt,” Sarah List wrote on Twitter.

“What you are doing is beyond sick, @rspca please #freebetty,” Jo Gammage said.

Ms Battista said the campaign was entirely RSPCA approved, but the organisation later confirmed to The New Daily “no approval was given by RSPCA for the latest promotion”.

To encourage Betty’s scholarly genius, food treats are placed on the keyboard as she pecks away.

“I think she is actually quite a bright chicken, I was just expecting gibberish,” Ms Battista said.

“One of the search engines tried to translate a tweet into Slovak the other day.”

She will be cooped up in the office until early November, when she will likely return to her free-ranging ways.

“We have got a few plans for Betty, but more than likely she will be sunning herself, walking and enjoying the sunshine,” Ms Battista said.

“Nothing that involves effort and the sort of pressure she is under now with #chickentweet.”

Betty’s vigorous training program can be viewed in the video below: