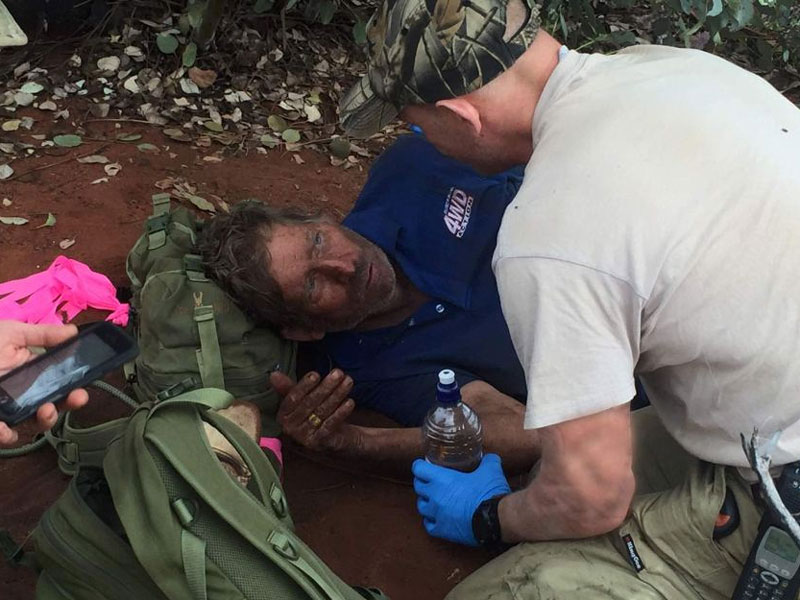 The rescue of a 62-year-old man missing for six days in bushland in remote WA came after an Aboriginal elder spotted his thong tracks from a car window, the elder’s colleague has said.

Reg Foggerdy was found severely dehydrated by searchers yesterday morning, six days after he was reported missing by his brother during a hunting trip near the remote town of Laverton.

He was wearing shorts, a T-shirt and thongs and was not carrying any food or water.

He told rescuers he sheltered under a tree and ate black ants to survive.

Gold Road Resources exploration manager Shaun Richardson was conducting a heritage survey with Aboriginal Elder Robin Smythe when they heard on an ABC News bulletin that Mr Foggerdy was missing.

Mr Richardson said he was “gobsmacked” when Mr Smythe spotted footprints a couple of days later.

“We were on the last leg of our survey and Robin Smythe, who was in one of the vehicles, looked out the window and he saw some tracks,” he told 720 ABC Perth.

“Now keep in mind we are in the middle of nowhere, you wouldn’t expect to see footprints, and he said to me this fella is wearing thongs.

“I don’t know how he did it. These guys, they read the land like a book and it just blows me away.

“As you can imagine a pair of thongs don’t leave a very big imprint in the sand.”

Water holes had dried up

He said they followed the tracks for a few kilometres before notifying authorities.

Mr Richardson said it was extremely dry and all the water holes in the area had dried up.

“He wasn’t going to find water out there, so all credit to him for the initiative he had to eat ants to survive,” he said.

“I’m sorry to say I’d actually written him off. I thought there was no way he could survive.”

Mr Foggerdy is recovering in hospital in Kalgoorlie.

His sister Christine Ogden said he had a very sore throat and hospital staff were pumping fluids into him.

She said he was expected to make a full recovery.