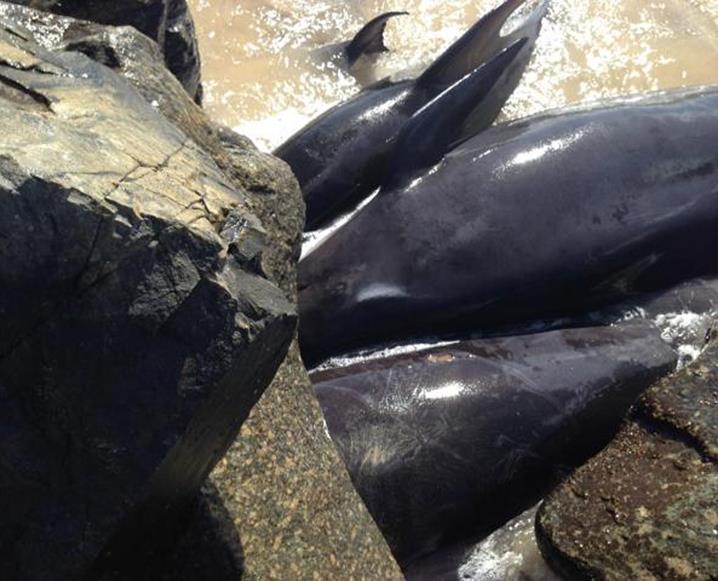 An attempt to save a group of long-finned pilot whales washed up against a breakwater wall in Western Australia appears to be over.

A team from the Department of Parks and Wildlife (DPaW) and local volunteers went to the Bunbury harbour breakwater wall after a group of more than 20 whales congregated against it Monday morning.

Twelve of the animals died.

Four whales have been taken five nautical miles out to sea, and were released about 2:40pm (AWST).

They all appeared to be heading for deeper water.

Volunteers, boats and jet skis made as much as noise possible to discourage the whales from returning.

A further 15 whales are in the area but are not considered in danger.

Earlier DPaW spokesman Kim Williams explained how the rescue was being carried out.

“They have been collected off the rocks. They have been gathered together in a small sandy bay beach not far from where they were stranding,” he said.

“The idea here is that gathering the animals together on the small beach, in shallower water, we have volunteers around each animal, each animal is in a sling and they’re stabilising the animals and just keeping them calm.

“The concept is that once we’re happy that all are fit and ready to go, and the vets have checked them over … we’ll attempt to turn the whales around and with a series of boats, either side of them, lead them out of the shallow water past the breakwater and into the more open water hopefully to join a larger pod somewhere out in the deeper ocean.”

Volunteers from the Dolphin Centre had been helping to keep the whales alive.

One volunteer, Bob, said it was hard to get to the whales.

“Here we’ve got a small number but it’s on rocks and it’s…hard to get down there in amongst the rocks,” he said.

Desperate attempts to save a struggling calf failed, but it was been towed out in an attempt to try and coax its mother away from the rocks.

At least 20 of these long finned pilot whales stranded along the groyne here. Devastating to see. @abcnewsPerth pic.twitter.com/fVU9Tcg8Ra

7 now dead, but look at this. Vollies holding 3freed whales so they can go out as pod when more rescued @abcnewsPerth pic.twitter.com/oipXHGtFS6 — Katrin Long (@Katrin_Long) March 23, 2015