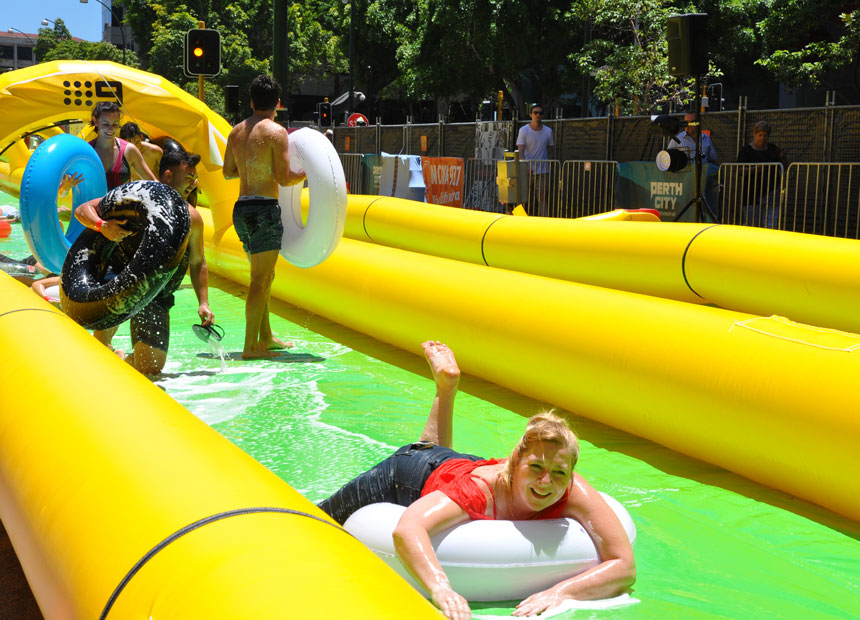 A 315-metre water slide down a main street in the Perth Central Business District has had people queuing since the early hours of Sunday morning.

Slidestreet is the first of its kind in Australia and has been inspired by street slides in the United Kingdom and United States.

• Make a splash: dive into the hottest hotel pools
• Cool down with these icy summer treats

More than 11,000 people are expected to enjoy the pop-up slide during its 13-hour appearance.

Despite sold out online bookings ahead of the event, there was still a long queue to head down the slide on Sunday afternoon, stretching more than 300 metres and with an average wait of an hour.

“Technical hitches occur but as you can see now, it’s going full-steam ahead, so I think with these first trials of things you need to be a little bit understanding,” she said.

Ms Scaffidi said the city had sponsored the event after numerous requests.

“For about the past year or so I have had so many requests on social media for this to be brought to our city,” she said.

“We decided to commit to it because for us the expenditure is worth it, it’s brought all these people into the city today.”

Ms Scaffidi declined the opportunity to ride the slide herself.

“I think that it’s probably fair to say downward slopes and publicly elected people isn’t a good combination,” she said.

The slide will move to Fremantle for four days later this month.