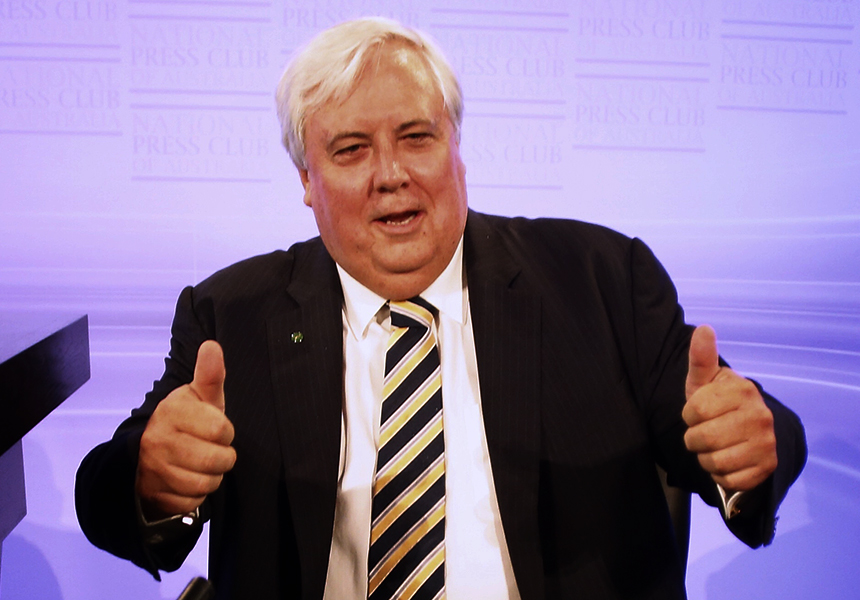 Big swings against Labor and the Coalition mean the fledgling Palmer United Party will have a likely voting bloc of four (including Victorian Ricky Muir) in the new Senate.

This places PUP and its outspoken leader in a powerful position to make-or-break Tony Abbott’s legislative agenda. Which means Mr Abbott should be playing the diplomat and inviting Mr Palmer to the Lodge for scones and tea – instead of accusing him of trying to “buy seats”, as he did last week.

Those comments were foolish and unnecessary. For heaven’s sake, Prime Minister, the Liberal and Labor parties spend tens of millions of dollars trying to woo voters. Provided it’s broken no laws, Palmer United is entitled to do the same.

Still, the Coalition is more likely to forge agreement on its reforms with PUP than it is with the Greens, who were the other big winners from the weekend. (The Greens and PUP will each win a seat, while the Coalition, with at least two, and Labor, with at least one, are battling it out for the sixth seat.)

The Greens have bounced back after a disastrous Tasmanian State election. Christine Milne’s leadership should be safe, for now.

The Greens and PUP both exploited voter anger over the election re-run and picked up a sizeable ‘protest’ vote. They will now take their place in a Senate that will have a record number of cross-bench parliamentarians after July 1.

When you combine the Greens’ 10 senators with PUP’s four, and then include Nick Xenophon, John Madigan, Family First’s Bob Day and the LDP’s David Leyonhjelm, you have a record-breaking 18 cross-bench senators.

The Coalition, likely to have 33 in the Upper House, will need to pick off at least six cross-bench senators to secure legislative passage.

Oh what fun lies ahead for Canberra watchers as the Government tries to scrap the carbon and mining taxes, while trying to win backing for Mr Abbott’s extravagant paid parental leave scheme.

And this from a Senate whose political diversity will range across the spectrum, from the hard Left to the uber-conservative Right. Something will have to give.

John Howard recognised the importance of reaching out to cross-bench senators. The former PM was the master at schmoozing those who stood in the way of his reform agenda.

Mr Howard also appreciated the need to ‘smooth’ the rough edges off some of his more controversial reforms (think GST and Telstra privatisation) in order to win Senate backing.

Tony Abbott needs to shed his bovver boy image and adopt some of his mentor’s negotiating skills. He should take a crash course in diplomacy 101, otherwise he will find his fortunes upended by a large group of senators who will not take kindly to being lectured to about “mandate”.

Still, for all his troubles and Senate uncertainty, Mr Abbott is in a better place than Bill Shorten whose leadership has been dealt a blow by the WA result. Labor is battling to secure a second Senate seat and has seen its primary vote slump even further, to perhaps 22 or 23 per cent.

This is a disaster for a political party that is out of office everywhere (except South Australia) and faces the uninviting prospect of the forthcoming Royal Commission into the union movement.

Western Australia delivered nothing to an Opposition leader at a time when he desperately needed some bounce, no matter how small.

Steve Lewis has been a senior member of the Canberra press gallery for two decades and is the co-author of the best-selling political thriller, The Marmalade Files.

Arise, Sir Clive! The new power of Palmer in WA