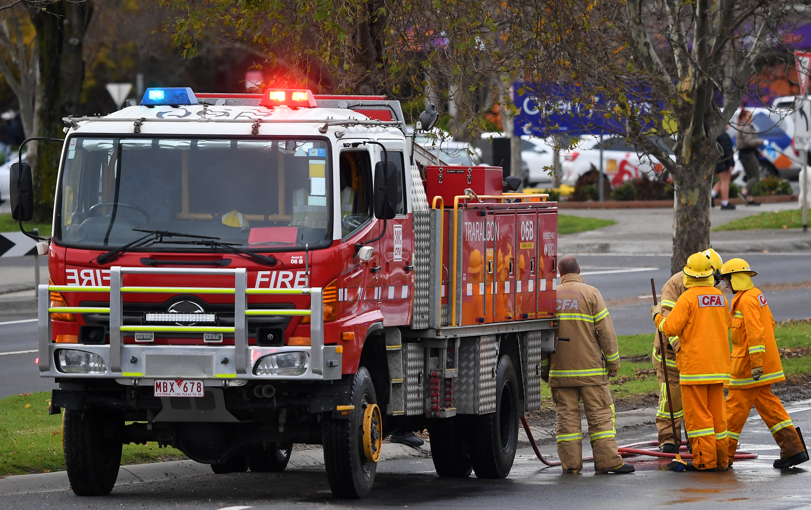 Flames were billowing from the family home's front door by the time the first fire units arrived. Photo: AAP

Four children have died in a Melbourne house fire that left hardened police and firefighters at the scene shocked and shaken.

A man and a woman, identified as the children’s parents, and an eight-year-old boy were able to escape the inferno, which erupted shortly after 1am on Sunday and took hold of the outer-suburban family home.

The man has been hospitalised with serious smoke-related injuries. The boy suffered minor injuries and the woman suffered smoke inhalation. One firefighter was assessed by paramedics for chest pain.

“Fire had already broken through the roof and was already coming out the front door,” he told reporters on Sunday.

“We were made aware of three people that had escaped the fire.”

Four children were trapped inside the house, but the intensity of the blaze made it impossible for crews to find them.

“With the roof already being compromised and the tiles collapsing, it was unsafe for our members to be able to proceed initially,” Lt Molloy said.

“With the distress of the parents and eight-year-old, it was difficult to get accurate information early on to focus our search areas.”

Found in the ashes

It took about 40 firefighters just under an hour to bring the fire under control.

The children’s remains were found inside the family home.

Their parents and another boy, aged eight, managed to escape the fire and are in hospital.

“The fire itself we have seen many times before, but the complexity involves having four children trapped inside the house,” Lt Molloy said.

He said fire crews felt “in a way, a little bit helpless” because they wanted to get into the house to find the children.

Emergency workers who attended the blaze have been offered counselling.

“We’re not wanting to put ourselves at that level of risk to have, what was likely to be, a recovery situation from the outset,” he said.

Victoria Police arson and explosives detectives are investigating the cause of the fire and will prepare a report for the coroner.

Detective Senior Sergeant Ashley Ryan said he could not say whether the fire was suspicious.

He declined to comment on reports it may have taken as long as 10 minutes to contact triple zero after the blaze erupted and said investigators are speaking to the surviving family members at hospital.

Michelle Grattan: Morrison’s defeat is a victory for Independents, and the Greens
Protesters in their tens of thousands take over Melbourne’s CBD
Today's Stories