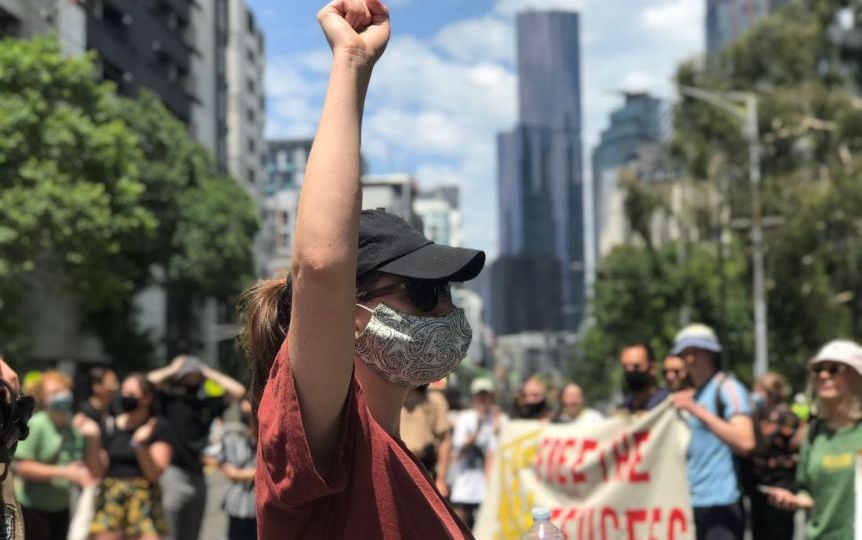 The Park Hotel in Melbourne has been the focus of protests by refugee supporters for months.

Protesters have rallied outside a Melbourne hotel being used to detain refugees after a COVID-19 outbreak escalated, with more than one-third of detainees testing positive for coronavirus.

There are 46 refugees and asylum seekers detained inside the city’s Park Hotel, which is being used as an alternative place of detention by the Australian Border Force.

On Friday, the ABF confirmed 15 detainees had tested positive, another 28 were negative and three were awaiting test results.

But the Refugee Action Coalition said an Iraqi refugee recently tested positive, bringing the number of cases among detainees to 16.

All of the refugees have been told to quarantine in their rooms to reduce the risk of transmission.

A number of supporters gathered at Lincoln Square at the front of the hotel for a peaceful protest on Saturday afternoon as detainees looked on from their rooms above.

Chanting “Get them out, free the refugees”, protesters called for better healthcare access for those detained and asked for them to be moved out of the hotel.

Refugee Action Collective Victoria’s Chris Breen said none of the refugees with COVID-19 had been assessed by a doctor in person, with one nurse on duty at the facility during the daytime.

“We are calling to free the refugees, for the hotel to be immediately evacuated, for those with COVID-19 to be assessed by doctors and transferred to appropriate facilities, and for those residents who are negative to be transferred to ordinary hotel quarantine for their own safety,” he said.

One of the refugees detained in the hotel with COVID-19 spoke to protesters via phone and said paramedics were recently called to help him, but were not allowed inside the hotel.

“There’s no medical treatment in here, no doctor,” he said.

Tamil Refugee Council’s Lavanya Thavaraja said many detainees were suffering from serious health conditions after being held in detention on Manus Island.

“They were locked up for years on Manus, brought here for medical treatment and are now being exposed to COVID. How can we allow our government to abandon these people in the middle of the city? We must find a way to set them free,” she told the rally.

Mr Breen said one of the refugees was in hospital on oxygen and had requested a vaccine “but was twice turned away from appointments and told his name was not on the list”.

The ABF has not confirmed the vaccination status of those at the hotel, but said within the Immigration Detention Network 62 per cent had received one vaccine dose and 55 per cent were fully vaccinated.

“All detainees in immigration detention facilities have been offered COVID-19 vaccinations,” it said.

Police allowed protesters to gather in separated groups of 15, with all participants required to wear masks, follow health directions and check in with QR codes.

AAP has contacted the ABF for a response.

Platinum Party at the Palace: Superstar line-up announced for Queen’s Jubilee celebration
Zoe Daniel: There are three approaches to climate change, Australia is choosing the wrong one
Today's Stories