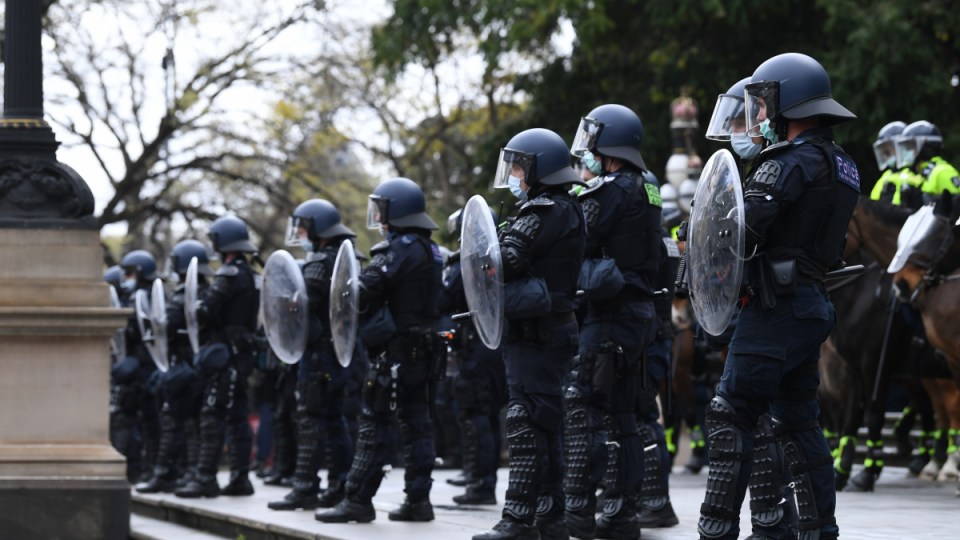 Rubber bullets have been fired and journalists attacked as tensions boiled over on a second day of angry protests against the mandated COVID-19 vaccines and construction ban in Victoria.

Hundreds of protesters, many wearing high-vis gear, marched through Melbourne’s streets on Tuesday, on the second day of demonstrations resulting in warnings from police.

As the day unfolded, the tradies’ protest rally became more violent, with one journalist – Paul Dowsley from Channel Seven – being assaulted multiple times.

Footage online showed the veteran newsman charged by a masked man in a high-vis jumper, grabbed around the head, and slammed against a bin.

The video begins with a Channel Seven cameraman being thrown to the ground by the same culprit. Fellow protestors were quick to try to separate the attacker from Mr Dowsley.

The Seven News reporter said he was also doused in urine and had open bottles thrown at him in separate attacks. He was left bleeding from his head after the second attack.

The moment @paul_dowsley is hit (again) this time with a can of drink. pic.twitter.com/jywumGU81O

The demonstrators started Tuesday’s protests outside Melbourne’s CFMEU headquarters before moving on to state parliament following warnings from the riot squad.

The crowd circled the city centre for hours before heading to the West Gate freeway just after 3pm, bringing traffic to a standstill at the entry ramp.

They walked to the top of the West Gate Bridge, singing, dancing and lighting a flare before turning around and heading back down the bridge at about 3.30pm.

At 4.30pm the protesters appeared to be moving towards South Wharf.

Earlier, the protesters were met by the riot squad, supported by the Mounted Branch. They warned them to stay back and fired rubber bullets into the crowd near the Queen Victoria Market.

“Attention, this is a police public order warning. You have previously been directed to leave,” an officer inside a line of riot police and officers on horseback told the crowd.

“Leave now or force may be used. No further warnings will be given.”

Empty bottles and cans were thrown back at the police.

The group were chanting “f— the jab” and “f— off Dan Andrews”.

Empty cans of rum and cola also lay strewn across the road outside parliament once the crowd dispersed.

From there, flares and fireworks were fired as the protesters marched up Swanston Street — where the Channel Seven news team was situated.

The protest is still unfolding.

Victoria Police confirmed at 5pm on Tuesday roughly 1000-2000 people were estimated to have attended the protest.

In a briefing, Victoria Police said three officers had been injured and several police cars were damaged.

Police confirmed at least 44 arrests had been made and said investigations were still ongoing.

The second day of protests came after the Victorian government shut down the construction industry for a fortnight late on Monday, citing “appalling behaviour” in a violent protest outside union headquarters and repeated non-compliance with on-site virus measures.

Victorian CFMEU construction secretary John Setka lashed out at the protesters, blaming them for the shut down.

“Those drunken fascist un-Australian morons are the reason construction workers will be sitting at home and not getting paid for the next two weeks,” Mr Setka said on Twitter on Tuesday.

Meanwhile, ACTU Secretary Sally McManus had a blunt message of her own for construction workers who rioted, condemning the protests as “absolutely unacceptable”.

“A whole lot of extremists have been winding people up with lies about vaccinations, and this is the result,” Ms McManus told Channel Seven on Tuesday.

Federal member for Maribyrnong and former union leader and Bill Shorten said he believed a group of professional troublemakers were to blame for Monday’s “shocking violence”.

“I never thought I would see a scene where you have people who call themselves Nazis using encrypted message systems to bring in a rent-a-crowd,” he told the Nine Network on Tuesday.

The Australian Nursing and Midwifery Federation called on the protesters to “stop the violence, and “stop fighting for the right to overwhelm our health system”.

“The Australian Nursing and Midwifery Federation (Victorian Branch) is calling on city protesters to stop thinking only of themselves, stop the violence and put the health and welfare of the Victorian community first,” ANMF Secretary Lisa Fitzpatrick said in a statement on Tuesday.

“Nurses, midwives and carers are exhausted and frustrated as they watch protesters fight for their right to overwhelm our health system.”

On Monday, riot police had to disperse about 500 protesters, who threw bottles at Mr Setka and smashed the office’s door down.

There were also allegations of bottles being thrown and a dog being kicked.

Mr Setka said the protesters were not all CFMEU members and blamed “neo-Nazis and right-wing extremists” for hijacking the event.

“There was a small minority of construction workers, some of them when it all got violent just walked away from it. It was hijacked by the professional protesters,” he told ABC Radio National on Tuesday morning.