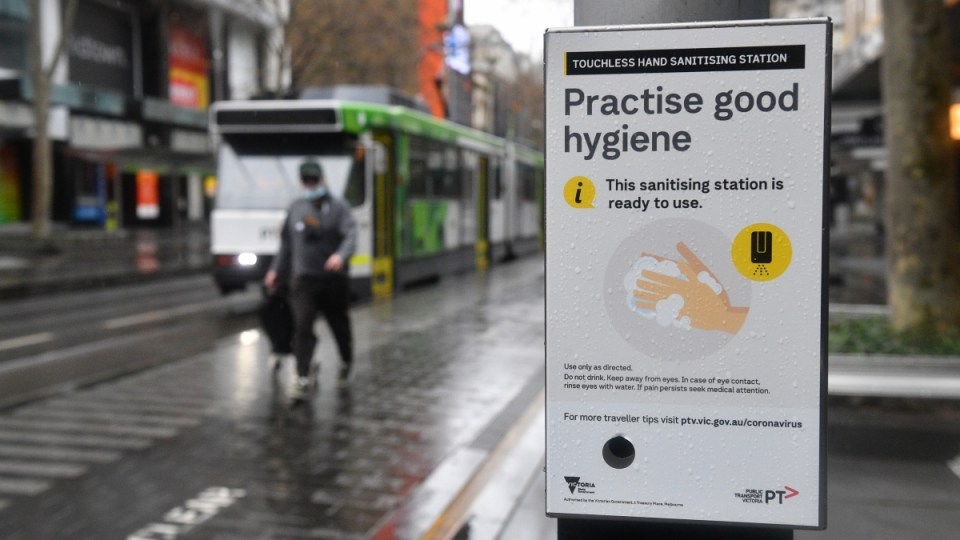 Victoria's lockdown appears on track to end within hours, after 11 local virus cases on Monday, all linked. Photo: AAP

COVID-19 infections continue to spread from a members’ stand at the MCG, with a 20-year-old man among 19 new locally acquired cases in Victoria.

The state’s latest case numbers include at least two school students as authorities confirmed exposure sites on Saturday rose to 165 from 30 overnight.

There are more than 10,000 primary close contacts from the sites including pubs, clubs, restaurants, sporting venues, shopping centres, schools and gyms in metropolitan Melbourne, suburbs and multiple locations at Phillip Island, a two-hour drive south of Melbourne.

“(Of the new cases) 18 were infectious in the community for a period of time and one was isolating the entire period of time,” Victoria’s Health Minister Martin Foley said on Saturday.

“Of those 18, an average of 1.7 days of their infectious period was spent in the community, and that figure is a vindication of the going-hard-and-going-early strategy that the public health team has put to the government.”

Investigations continue into the exposure of crowd members at the Geelong-Carlton game at the MCG last Saturday.

The “index case”, a man aged in his 60s from Barwon Heads, attended the game with a friend who is also positive.

They attended Young and Jacksons pub in the CBD where four men unknown to them contracted the virus.

Once at the ground, the man made “a number of movements from his seat” COVID response chief Jeroen Weimar said.

“He was a particularly diligent QR code user, so we thank him for that.”

All new Victorian cases are linked to the current outbreak, which totals 43 community cases. None are in hospital.

Multiple new exposure sites can be found at www.coronavirus.vic.gov.au.

A fifth lockdown which began in Victoria on Thursday night will run until at least Tuesday.

Authorities said it was too early to comment on a possible extension of the lockdown.

“There is enormous frustration for all of us about the uncertainty around this virus,” Chief Health Officer Brett Sutton said.

“But you might as well look at a horoscope as to how the trajectory will look three days from now.

“We just need to brace ourselves for any possibility.”

Those who have lost work due to the lockdown will be eligible for weekly payments, jointly funded by the state and Commonwealth governments.

Some 90,000 businesses and sole traders that received support during the fourth lockdown last month will be automatically eligible for state government payments of $2000 or $3000.

The rules applied during last month’s lockdown were reimposed overnight, including the five reasons to leave home, a 5km travel limit for exercise and shopping, and compulsory mask-wearing indoors and outdoors.

All commercial furniture removalists have also been banned from entering Victoria for two weeks.

Transport workers travelling into Victoria from red zones will be required to get a COVID-19 test every three days instead of seven.

Queensland, Western Australia and Tasmania have imposed barriers on travel from Victoria.

No overseas acquired infections have been recorded on Saturday.