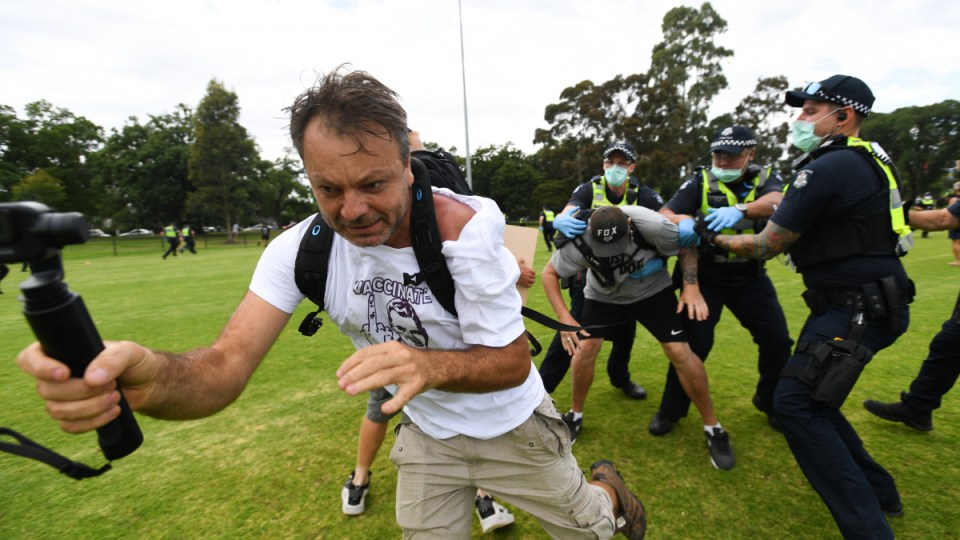 Police arrest a protester during an anti-vaccination rally in Melbourne. Photo: AAP

Anti-vaccination protesters have clashed with police just days before Australians are due to start getting jabs.

Hundreds of people were seen at Melbourne’s Fawkner Park on Saturday rallying against the COVID-19 vaccine, when they were met by a heavy police presence.

The “Millions march against mandatory COVID vaccinations” is one of 11 locations across the country where anti-vaccination protesters are voicing their opposition against what event organisers have described as “medical coercion”.

Officers used pepper spray on some protesters when they moved beyond cordons and at times, police appeared to lose control of the crowd, an AAP photographer on the scene said.

The rally started peacefully with speakers addressing the crowd, but “people started getting pretty fired up,” the photographer said.

Speakers made comments such as “God’s on our side” and “it’s a fight between good and evil”.

Videos taken by Reignite Democracy Australia, an organisation set up in opposition to the Victorian government’s handling of the coronavirus pandemic, show a speaker congratulating the crowd for turning up.

The speaker talked about feeling “so alone” during the lengthy stage four lockdowns in the city last year and feeling like she was not allowed to question the government’s decisions.

At Sydney’s Hyde Park, controversial celebrity chef and conspiracy theorist Pete Evans was among the hundreds of protesters.

Evans, who has recently been banned from social media platforms, addressed the crowd in Sydney.

Protesters marched with placards with slogans such as “herd immunity of vaccines is a scam” and “your body, your choice”.

High-risk Australians, including frontline health workers, are due to start receiving a coronavirus vaccination on Monday.