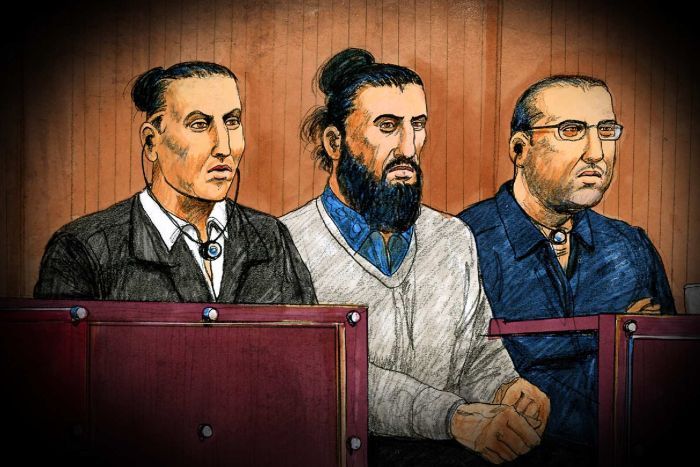 Three men have been jailed for at least 16 years each for planning to use machetes and improvised bombs to carry out a terrorist attack in Melbourne’s CBD.

A lengthy trial heard the men had purchased machetes as well as metal pipes, light globes and batteries to make explosives and had tried to obtain guns.

Abdullah Chaarani, 29, and Ahmed Mohamed, 27, must each serve 28 years in prison.

The third man sentenced on Friday, 24-year-old Hamza Abbas, was jailed for at least 16 years.

In sentencing, Supreme Court Justice Christopher Beale described the 2016 plot as “an assault on the fundamental values of our society”.

Justice Beale said the three men had embraced Islamic State ideology and believed the planned attack would be pleasing to Allah.

“The stupidity of that belief was matched only by its malevolence,” he said.

He said he accepted the three men were on the path to deradicalisation and had reasonable prospects of rehabilitation.

The plot is the second terrorism conviction for Chaarani and Mohamed, who are already serving 22-year prison terms for setting fire to a Shia mosque in Melbourne’s north just a few weeks before the planned attack.

Hamza Abbas’s brother Ibrahim Abbas was the key witness in the case, claiming to be the group’s ringleader.

Last year, he was sentenced to 24 years in prison for leading the plan, which included putting an explosive vest on his brother Hamza.

Father told plotter ‘you are not my son’

The sentencing of the trio has taken place more than a year after they were found guilty by a jury.

It was delayed by the trial in which Mohamed and Chaarani were convicted of terrorism offences for torching the Fawkner mosque.

That crime was described by the sentencing judge as “an attack on religious freedom” motivated by “the evil ideology” of the Islamic State (IS) group, also known as ISIS.

During a plea hearing before Justice Beale last month, Mohamed and Chaarani sought to convince the court that they had turned their backs on IS and had been on a path to deradicalisation since their arrest in December 2016.

Despite maintaining their innocence through both trials, the men took the unusual move of giving evidence during the plea hearing, admitting to the crimes.

He told the court of being visited by his father in prison in the months after he was arrested in late 2016.

His father told him “you’ve embarrassed me. You’ve shocked me. You are not my son,” the court heard.

Mohamed told the court he also denounced radicalism and IS, saying he took part in the plot because: “I wanted to make bombs. I thought they (IS) were cool.”

He told the court he felt pressured by other Muslim boys when they talked about carrying out terrorist acts.

Hamza Abbas’s lawyer had told the court her client played a lesser role in the plot, and was not fully aware of the plan.