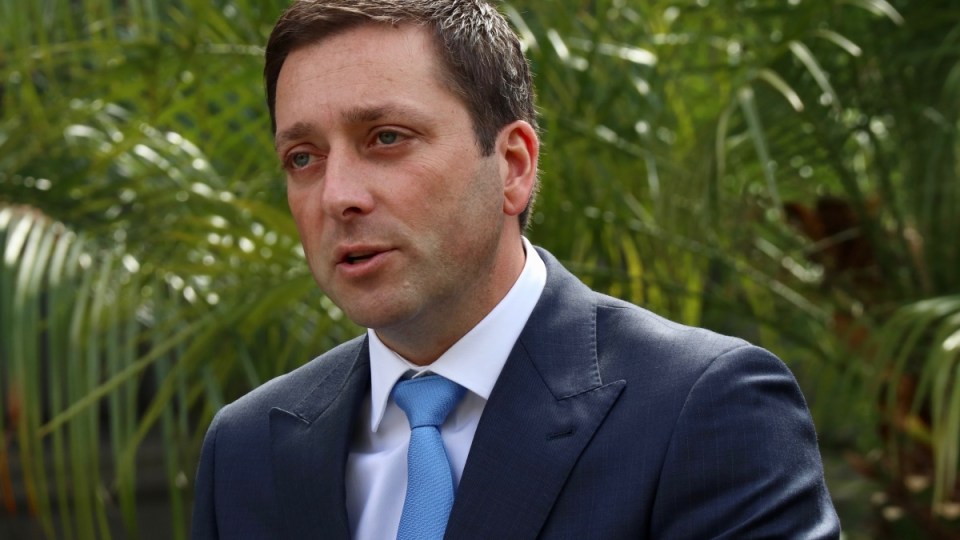 Questions have been raised about Opposition Leader Matthew Guy's knowledge of the donation deal. Photo: AAP

A proposed deal for a Victorian Liberal donor to pay a senior staffer more than $100,000 to his private business will be referred to police, integrity and electoral agencies.

The Victorian Labor government is asking the state’s electoral commission, police and ombudsman, and the Australian Federal Police, to investigate after Opposition Leader Matthew Guy’s chief of staff asked a donor to make the payments.

The contract was not signed but the staffer, Mitch Catlin, resigned on Tuesday.

“Victorians are entitled to answers about this secret deal and the Liberal Party should be demanding their leader provide them,” he said.

While conceding a code of conduct was needed for opposition staff, Mr Guy described the referral as a “desperate” attempt from the government to distract from its own integrity failings.

“Let’s be perfectly clear. This referral relates to an arrangement that was never agreed to, signed, or put into place,” he said.

The proposed agreement, published by The Age newspaper, would have required the unnamed donor to pay Mr Catlin’s marketing company Catchy Media Marketing and Management $8333 a month for “supporting business interests”.

It also included a clause that would have voided the deal if Mr Catlin departed his role.

Under Victorian law, political donations above $1050 must be disclosed and are capped at $4210 over four years for individuals and organisations.

Asked whether the proposal was an attempt to funnel donations to the party without disclosing the money to the Victorian Electoral Commission, Mr Guy said: “No.”

“Every single donation we disclose, as per the rules … and any mechanism otherwise would never be accepted,” he said.

The contract was drafted around the time Mr Guy reclaimed the Victorian Liberal leadership in September last year.

Mr Guy said he and Mr Catlin moved to employ all opposition staff under the budget for parliamentary staff to ensure transparency after he took up the leader’s role.

“We believe it’s best to have all staff paid out of the opposition budget, every cent, with nothing beyond that, which is where we are today,” he said.

Mr Catlin is reported to have sent the contract, drawn up by lawyers, to Mr Guy’s private email address “as per the original email agreement” between the pair and asked the Liberal leader to forward it onto the donor.

Mr Guy said he couldn’t explain why the contract was sent to his private email address, but he believed he may not have had another set up after his successful leadership challenge.

“You try to get an email set up at the DPC (Department of Premier and Cabinet) … it doesn’t happen in three hours,” he said.

Mr Guy said he had grown close to Mr Catlin since he returned to the top job.

The revelation comes as the opposition tries to talk up its integrity credentials after two probes into Labor’s culture, promising to increase funding for state corruption bodies if it wins the November election.