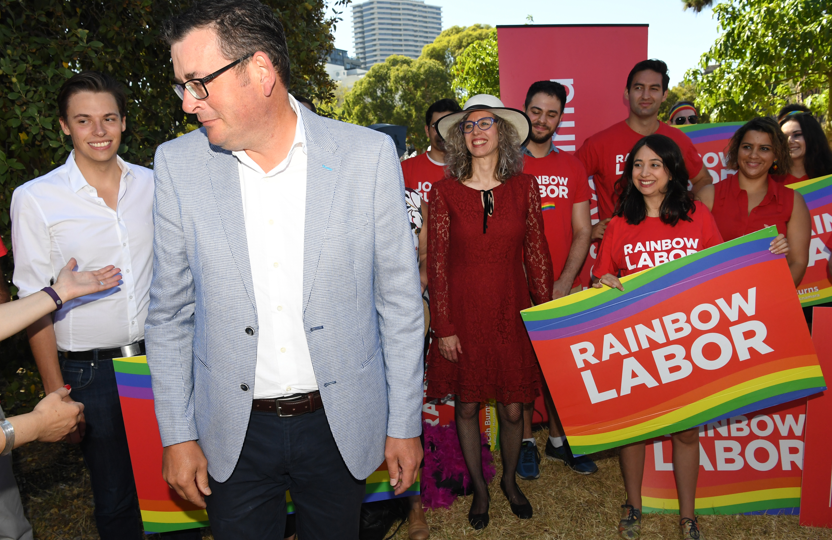 Premier Daniel Andrews has long been a champion of the gay and trans community. Photo: AAP

Ms Deeming was endorsed for preselection at a Liberal convention on Saturday night in the contest for the upper house Western Metropolitan Region seat in the state election.

The high school teacher and a mother-of-four will replace MP Bernie Finn.

Mr Andrews and Health minister Mary-Anne Thomas expressed outrage over the endorsement, saying her political views are harmful to the LGBTQI community.

“I’m not here to comment on the Liberal Party and some of the transphobic, homophobic and frankly, unVictorian kind of hatred. This spite just doesn’t work,” Mr Andrews said.

Ms Deeming has previously called for separate bathrooms for transgender people and has spoken out against banning Australia Day and Drag Queen Story Time for children.

“If you’re trans in this state, you’re five times more likely to self-harm than if you’re not. That is a very serious issue,” Mr Andrews said.

Ms Thomas described Ms Deeming as a “clone” of Mr Finn, who was booted from the Liberal Party in May for saying abortion should be banned across the state.

“I have to say, I’m pretty outraged but I’m not surprised,” Ms Thomas said.

“What we’ve seen here is a political party that made a big song and dance about kicking out Bernie Finn and now they’ve pre-selected a Bernie Finn clone.”

Ms Deeming made headlines while running for city council in 2020 when she shared controversial views in her candidate statement submitted to the Victorian Electoral Commission.

“Resources should be spent wisely and only ever allocated based on need, not on identity markers like religion, race or sexuality,” she said.