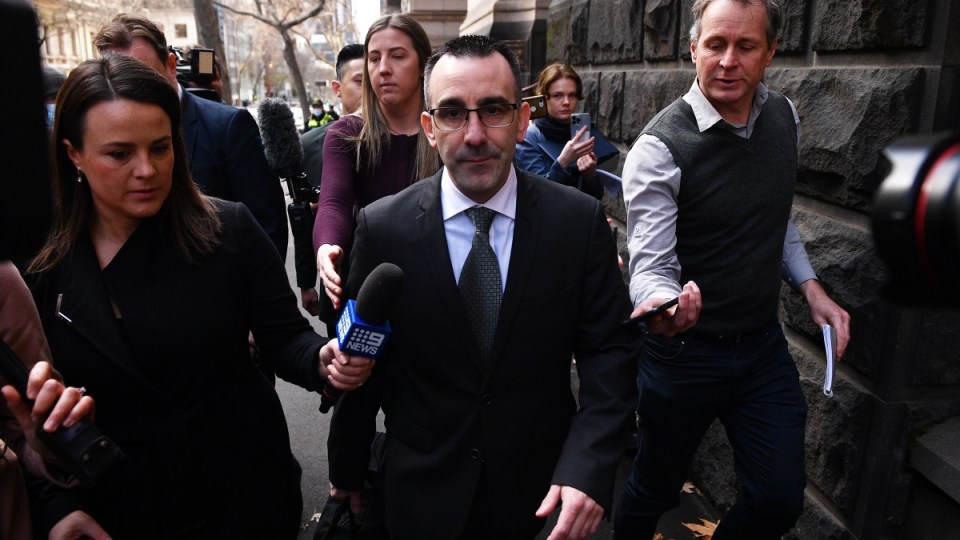 Jason Roberts was released on bail after being found not guilty of murdering two officers in 1998. Photo: AAP

As Jason Roberts spends his first full day of freedom in more than two decades, questions are turning to whether he could receive compensation for his time behind bars.

Roberts was acquitted on Monday of the 1998 murders of Victoria Police officers Sergeant Gary Silk and Senior Constable Rodney Miller.

The officers were staking out an armed robbery target in Moorabbin in the early hours of August 16 when they were ambushed and killed by Bandali Debs.

A jury in 2002 convicted Roberts as well, but Victoria’s Court of Appeal quashed that conviction finding there had been a “gross and fundamental corruption of the trial process”.

After nearly four months of evidence and days of deliberations, a fresh jury found Roberts not guilty of both murders.

The 41-year-old is still a convicted man, though, and is yet to be sentenced after he pleaded guilty to committing 10 armed robberies with Debs, his then-girlfriend’s father in the 1990s.

With the murder convictions overturned, Roberts could be eligible for an ex-gratia payment from the state government for time spent behind bars.

The alternative is for him to sue the state for damages. However, to do that he would have to prove he was the victim of a malicious prosecution.

Ex-gratia payments have been made before: a Victorian man received $525,000 in 2010 for 18 months he spent behind bars on a wrongful rape conviction.

In a similar case in Canberra, David Eastman was offered a $3 million ex-gratia payment from the ACT government when his conviction for the murder of Australian Federal Police assistant commissioner Colin Winchester was overturned in 2018.

Like Roberts, Mr Eastman had his initial conviction overturned on appeal and was acquitted after a retrial.

He turned down the offer and sought $18 million, ultimately being awarded more than $7 million under the ACT’s Human Rights Act.

The ACT is the only jurisdiction with legislation that allows such an award.

Barrister Adrian Hoel said the real issue for Roberts would be whether the state would make a payment offer.

“If there’s a willingness, an appetite to make this right if there’s a view that something needs to be made right, it could happen fairly swiftly,” he told AAP.

“If the state is just not interested, nothing is going to happen perhaps at all, but certainly not quickly.”

“Losing a member, let alone two to an act of callous, criminal violence is our worst day in policing,” he said.

“Knowing that a person that our investigators alleged committed that horrific act has gone free is almost as traumatic.”

Families of Sgt Silk and Sen Const Miller were devastated by the verdict.

“We are enormously grateful to the detectives of the Lorimer Taskforce whose dedication and professionalism has been outstanding,” they said.

“Their commitment over the 24 years since Gary and Rod were murdered has been an inspiration.”

Chief Commissioner Shane Patton, who knew Sgt Silk professionally and socially, and who had been on jobs with Sen Const Miller, said the jury’s decision was disappointing.