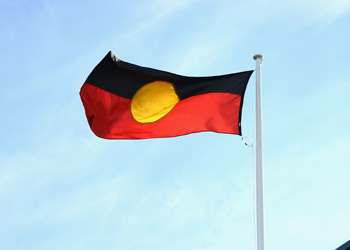 The Aboriginal flag will have a permanent home atop Melbourne’s West Gate Bridge within days.

The Aboriginal and Torres Strait Islander flags have flown on a rotational basis above the West Gate Bridge during Reconciliation and NAIDOC weeks since 2019.

But when NAIDOC week ends on Sunday, the Aboriginal flag will remain in place on the bridge, replacing Victoria’s state flag.

“The West Gate Bridge is one of our most visible landmarks. Now, the thousands of motorists who use the bridge every day can view the Aboriginal flag flying proudly above our city,” Victoria’s Roads and Road Safety Minister Ben Carroll said.

The Victorian government is exploring ways to fly the Torres Strait Islander and Victorian state flags alongside the Aboriginal and Australian flags.

“The Aboriginal flag represents inclusiveness, recognition and respect and having it flown permanently atop the West Gate Bridge demonstrates this commitment to Aboriginal communities in Victoria,” she said.

It follows a similar move by the NSW government to soon permanently fly the Aboriginal flag on the Sydney Harbour Bridge at a cost of $25 million.

NSW Premier Dominic Perrottet last month said he did not want the cost to detract from the project.