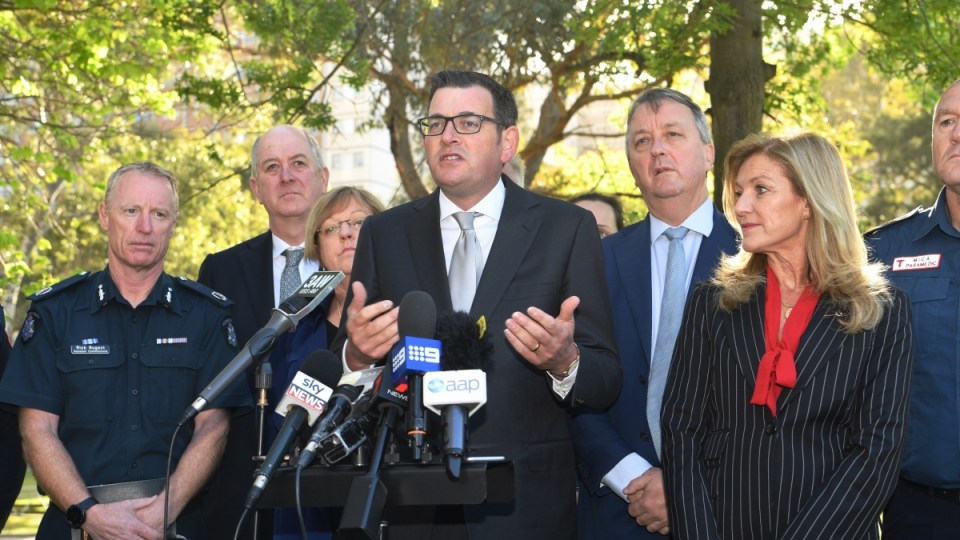 Deputy Premier James Merlino, Health Minister Martin Foley, Police Minister Lisa Neville and Sports Minister Martin Pakula issued a flurry of statements on Friday morning revealing their decisions not to recontest their seats and to step down from cabinet.

“I’m very sad to have been advised and to announce the farewell of a number of my close friends and colleagues,” Premier Daniel Andrews said.

He said portfolio arrangements would be finalised at a special caucus meeting on Saturday.

In the interim, Natalie Hutchins will take over the education and training portfolios and Danny Pearson will oversee the Department of Families, Fairness and Housing.

Ben Carroll will step into the jobs portfolio while Lily D’Ambrosio will take on responsibility for the Department of Environment, Planning, Land and Water.

Health will become the responsibility of Mary-Anne Thomas.

Mr Andrews said he could never repay Mr Merlino for his loyalty and said Victorians couldn’t have had a better acting premier during his own absence last year.

Mr Merlino said renewal was critical for any government for fresh ideas and new energy.

“As hard as this is, I believe in my heart that renewal, new cabinet ministers around the table, is the best thing for the government and our state,” Mr Merlino said.

Mr Foley’s exit, amid the COVID-19 pandemic, means the Victoria will have a fourth health minister in as many years.

“The past two years have been a tough time for all Victorians,” he said.

“Many of us have come to reflect on what we aspire to achieve. I am no different. I am looking forward to contributing to a better, fairer, sustainable Victoria in a different capacity.”

Mr Pakula’s lower house seat of Keysborough has been scrapped as part of an electoral redistribution, but he had been expected to move to the upper house.

He described politics as all-consuming.

“As politicians, we are notoriously bad at appreciating when considerations for our own wellbeing demand that we stop and find something else to do with our lives. I’d like to think I’m not one of them,” he said.

She said her decision to retire was one of the hardest of her life and had been made in consultation with doctors.

“I wish it were otherwise, but I must be honest with myself, the wonderful people I work with and the Bellarine community.”

As few as 10 of the 22 Victorian Labor MPs sworn into cabinet after the 2018 election will remain at the November election.

“The only true renewal we’ll see is at the November election when Daniel Andrews is defeated,” he said.