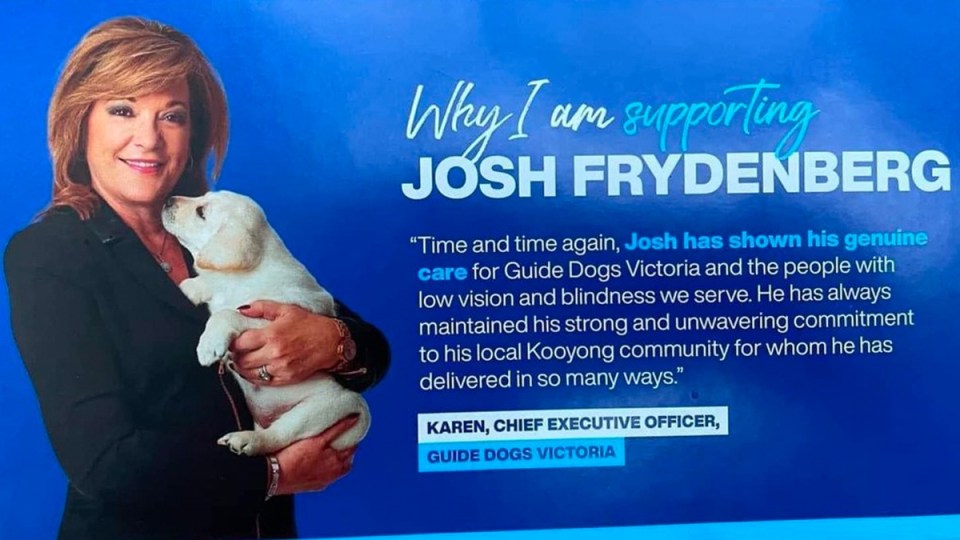 An investigation by Guide Dogs Victoria is underway into the Josh Frydenberg election flyer. Photo: AAP

Guide Dogs Victoria boss Karen Hayes has resigned, but the investigation into her endorsement of former treasurer Josh Frydenberg for re-election continues.

Ms Hayes was featured in a flyer and a promotional video posted on social media backing Mr Frydenberg as the member for Kooyong ahead of the May 21 federal poll.

The charity’s board confirmed it had not approved the material and requested its immediate removal from circulation while launching an internal investigation.

Ms Hayes stood down on April 26 and on Tuesday Guide Dogs Victoria announced it had accepted her resignation.

The flyer and promotional video were authorised by Mr Frydenberg’s Hawthorn East office, in compliance with electoral laws.

However, charity groups are bound by regulations enforced by the Australian Charities and Not-for-profits Commission and can be stripped of their status if unable or unwilling to rectify serious breaches.

Ms Hayes also appeared in a similar promotional video for Mr Frydenberg before the 2019 federal election.

The independent investigation was ongoing, he said.

Ms Hayes described her resignation as a “difficult decision” but did not reference her reasons for leaving in a statement.

“I am overjoyed at what we’ve achieved, and will watch from the sidelines with enthusiasm and support to see the program through to finalisation,” she said.