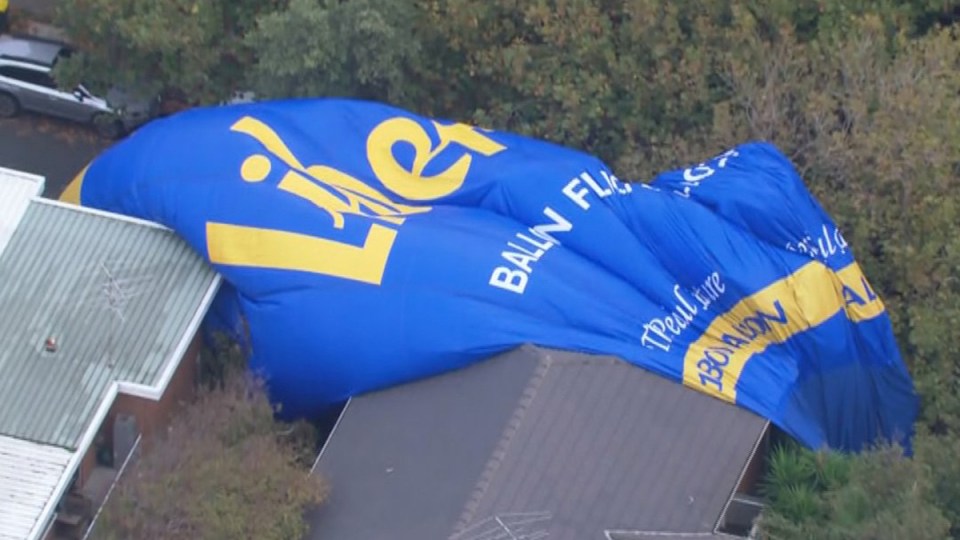 The balloon landed in the front yard of a block of flats in inner-Melbourne. Photo: Twitter/Nine Network

A hot air balloon on its maiden flight with 12 people on board has made an emergency landing in a Melbourne street.

Emergency services were called to a property in Elwood, in Melbourne’s inner-south-east, about 7.20am on Wednesday to find a balloon draped over a block of flats and the basket in the yard and car park.

Police say no one was injured and the Civil Aviation Safety Authority will investigate.

Liberty Balloon Flights chief pilot Nick Brau told 3AW radio it was the balloon’s maiden journey and was flying for about half an hour but struggled to get in the air properly.

He described the incident as “a bit embarrassing” and said there’d been a malfunction he could not explain.

“The valve that releases hot air from the top, which we use to manoeuvre the balloon, didn’t seal properly,” Mr Brau told 3AW.

“I was losing a lot of heat and it was difficult to keep the balloon up in the air, so that’s why I was flying low, and I was aiming for the beach but we didn’t make it for about 200 metres.”

Passenger Karen was on board with her family for her daughter’s birthday. She said the basket bumped the tops of a few buildings on the way down.

She told ABC Melbourne radio Mr Brau did an amazing job landing the balloon on the small suburban street.

“He missed the powerlines, he missed the cars. Some big elm trees buffeted at our fall, so we didn’t come down too aggressively, although it was, you know, quite a thud,” Karen said.

“But nobody was hurt, he was incredibly calm. He did an amazing job, really.”