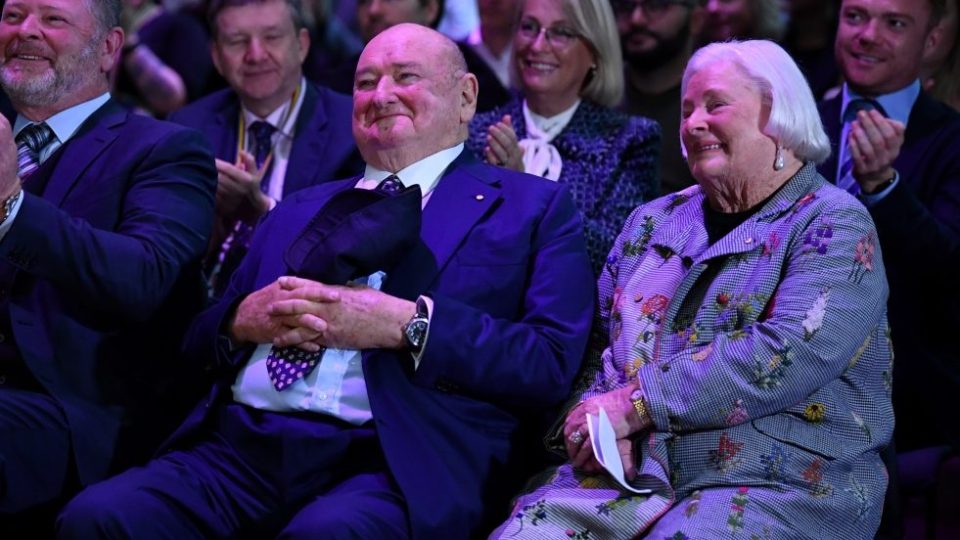 The new NGV Contemporary will be named after logistics magnates Lindsay and Paula Fox. Photo: AAP

The couple will donate $100 million towards the building, which will be named The Fox: NGV Contemporary.

The gallery will be built in Southbank, showcasing contemporary art, design, fashion and architecture of local, national and international significance.

It will sit within a wider, new 18,000 sqm public space in the heart of a transformed Melbourne Arts Precinct.

The donation was the idea of Ms Fox, an NGV board member.

“How could I say no after being married 62 years,” Mr Fox said on Tuesday, which was also his 85th birthday.

“She said ‘I want some money to give the gallery’, then she told me how much. But it was too late. I’d signed the cheque.”

Ms Fox was “thrilled” by the family name being adorned on the gallery and said the gift was the culmination of years of support for the NGV.

“We hope that the donation will inspire others in supporting the program to make this an icon for the future,” she said.

Creative Industries Minister Danny Pearson said the $100 million contribution was the largest made to an arts gallery-related capital project by a living donor.

“Many of us grew up seeing the bumper sticker saying ‘you’re passing another Fox’. This investment today means for generations to come, people will be coming to The Fox,” he said.

NGV director Tony Ellwood became emotional during Tuesday’s announcement and said the title was bestowed by the gallery and the Victorian government to recognise the contribution.

He said it was the perfect way to kickstart a philanthropic campaign, although the gallery isn’t chasing a set donations figure at this stage.

“This needs to be the biggest campaign we’ve ever run and probably the biggest arts and cultural campaign ever run in the country,” he said.

About $120 million has been donated to build the gallery so far, including the money from the Fox family.

The philanthropic donations will mean the government pays less to build the $1.7 billion project.

NGV Contemporary is due to open in 2028 after the design by Angelo Candalepas and Associates was revealed in March.

Initial construction is expected to begin in the next 12 months.

Let’s face it – we’re addicted to polls, even if they’ve got things so wrong in the past
Police investigate Vic church burglaries
Today's Stories