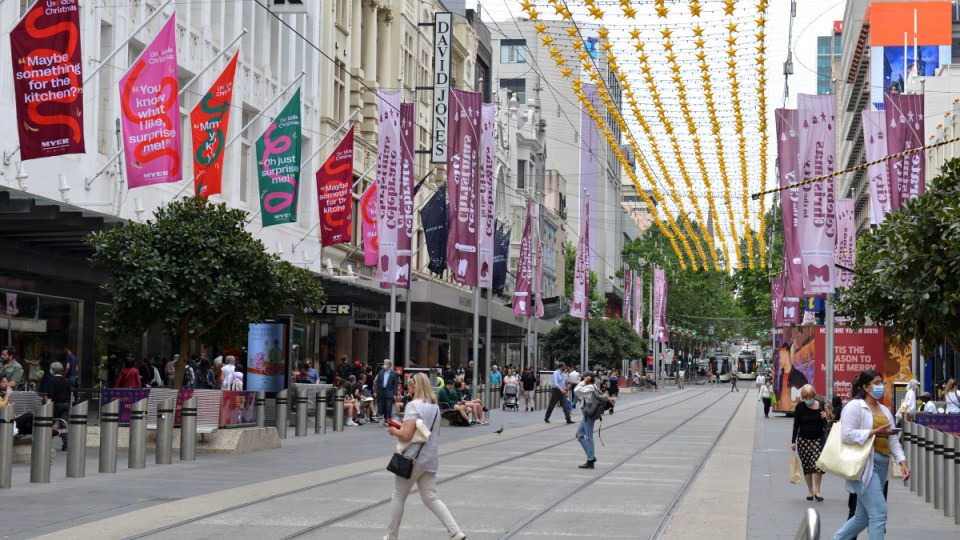 The Victorian government expects the amount of workers coming into Melbourne's CDB will increase. Photo: Getty

The return of office workers will be a “substantial boon” for Melbourne’s struggling CBD, but the state government doesn’t believe the city centre will immediately rebound to pre-pandemic times.

Victoria recorded another 5852 COVID-19 cases and three deaths on Monday, the first weekday since a work-from-home recommendation was dumped and mask rules eased.

Industry Support and Recovery Minister Martin Pakula said he had noticed an uptick of activity in central Melbourne in the past month and expected foot traffic to grow in coming weeks as a result of the changes.

“The return to offices of workers, I think, will be a substantial boon to the CBD,” he told reporters on Monday.

“We’re seeing the public sector returning from today and I think you’ve heard from the premier previously say that the objective is to have … about three days a week as the starting position.

“(But) there are some workers who will continue to work from home, either two days a week or more, for a range of reasons. It is going to be different to what it was in 2019.”

In a further change, the Victorian government has swung the axe on its long-running COVID-19 isolation payment system.

Victorians will no longer be able to claim the $450 payment while awaiting a PCR test result, previously dubbed the “gold standard” by Premier Daniel Andrews.

Mr Pakula said rapid antigen tests had reduced the need for people to take a PCR test and isolate, and were now widely available after widespread shortages in January amid the Omicron wave.

“Rapid antigen is the standard now,” he said, noting their ability to produce results immediately or within 15 minutes.

“There’s just not an obligation or circumstance where people need to isolate while they wait for a result.”

More than 1.2 million payments worth about $545 million have been approved since the isolation payment system began in July 2020 during the state’s devastating second wave of infections.

Final claims must be submitted before 9am on Wednesday and involve a PCR test taken on Tuesday or earlier.

Payments will still be available for Victorians who have to self-isolate, quarantine or need to care for someone in those circumstances under the federal government’s pandemic leave disaster payment.

There were 4329 positive rapid antigen test results reported on Monday, compared to 1523 from PCR lab tests.

Some 283 infected patients are in hospital, up nine from Sunday, with 42 in intensive care and seven of those on ventilation.

Falling COVID-19 hospitalisations allowed elective surgery caps across the state to be lifted on Monday, after non-urgent procedures were halted in early January.

Victorian workers back to offices in CBD ‘boon’