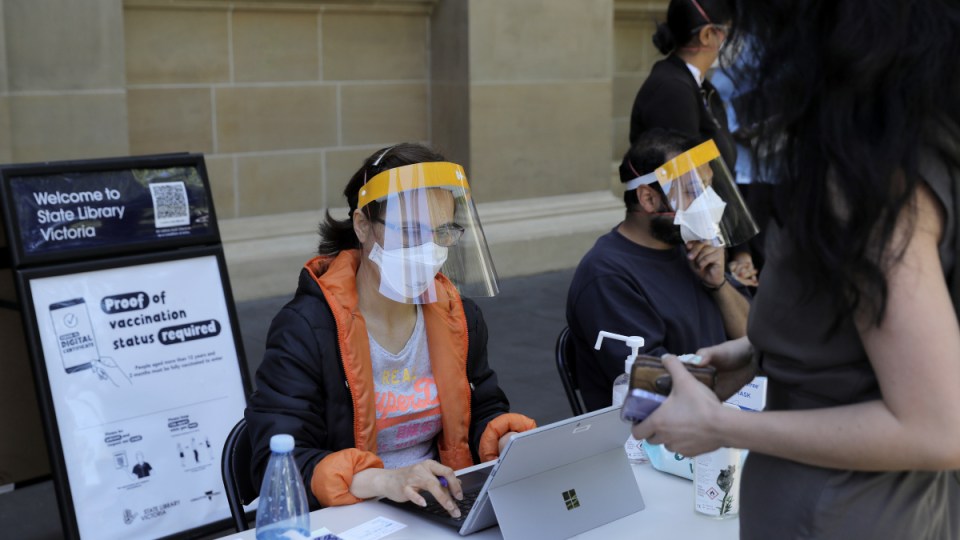 About 46 per cent of Victorians over 18 have received a vaccine booster. Photo: AAP

Victoria has no plans to water down its venue check-in requirements, fearing a potential uptick in COVID-19 cases or new variant could mean they need to be reimposed.

Queensland this week scrapped check-ins at venues where proof of vaccination is not required, such as supermarkets, retail outlets, hairdressers and gyms.

But Government Services Minister Danny Pearson said the state didn’t plan to follow Queensland’s lead, adding the system might be needed in future.

“It’s very disruptive for people to ask them to QR code and check in, then potentially say ‘Don’t worry about doing that’ and then having to reimpose those requirements,” he told reporters on Wednesday.

“This infrastructure has played a really important role in keeping us all safe during the course of this pandemic.”

There have been more than a billion QR code check-ins through the Service Victoria app since the system was launched at the end of 2020.

Victorian health authorities have not recently been using QR code data from venues and workplaces for contact tracing purposes, with infected people now responsible for alerting their own contacts.

Despite some users questioning their usefulness, 125 million check-ins have still been recorded since the beginning of January this year.

Mr Pearson said the state’s check-in codes requirements would remain in place for as long as necessary, or health advice dictates.

“We know how things can change. Three months ago, none of us had heard of Omicron,” he said.

“None of us thought that Omicron was going to be such a feature. The number of people who were afflicted with Omicron even at the start of December … was a really low number compared to now.”

Victoria recorded a further 21 COVID-related deaths and 9908 new cases on Wednesday, marking the fifth straight day new infections have been under 10,000.