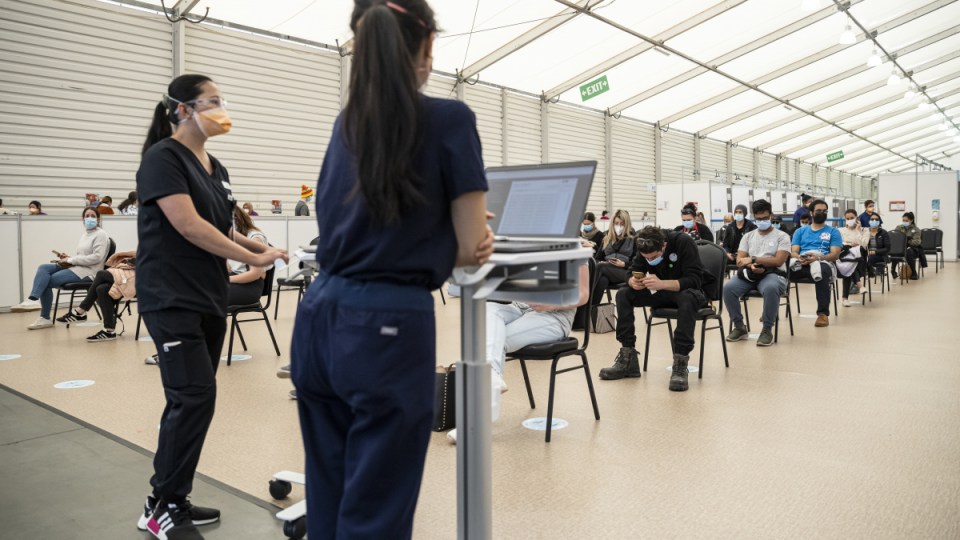 Nearly 40 per cent of eligible Victorians have had third, or booster, doses of COVID vaccines. Photo: AAP

Victoria has posted another 34 COVID-related deaths and 11,311 more cases, as chief health officer Brett Sutton says he has not been asked for advice about a third vaccine dose mandate.

The new cases, confirmed by the health department on Tuesday, were made up of 4251 from PCR tests and 7060 from rapid antigen tests.

Hospitalisations with COVID-19 have also fallen, down by 22 to 851 patients. There are 106 people in intensive care, up four from Monday – and 30 of those are on ventilators.

About 39 per cent of Victorians aged over 18 have received a COVID-19 booster, after 17,799 doses were administered at state clinics on Monday.

It came after Professor Sutton faced a barrage of questions in the first public hearing of the state’s Pandemic Declaration Accountability and Oversight Committee on Monday.

The committee was created as part of the controversial pandemic laws that passed parliament last year, shifting power for health measures to the government and away from Professor Sutton.

Professor Sutton, who appeared virtually, said he had not provided official advice to the government on the plan to mandate a third vaccine.

“I haven’t been requested to provide advice on broader vaccine mandates at this stage,” he said.

Professor Sutton said a third dose could be important, because compared to those without any vaccination, vaccinated Victorians are 70 per cent more unlikely to catch the virus.

Premier Daniel Andrews on Sunday said he expected authorities would redefine what it meant to be “fully vaccinated” and discard the term “booster” as soon as this week.

Meanwhile, more than 56,000 rapid tests are being delivered to Victorians farmers and locals across 25 towns from Monday as industry groups take up the initiative to ease COVID-19 disruptions in essential food supply chains.

Victorian Farmers Federation President Emma Germano said the tests were ordered within 48 hours, highlighting demand and that the state government’s response has been an “afterthought”.

“Our industry, as well as many others have been crying out for RATs for months. We decided to get on the front foot and secure a supply of tests ourselves,” she said.

The Victorian government has ordered more than 200 million RATs. But it has so far announced only 25,000 will be supplied to critical industries at a cost basis.