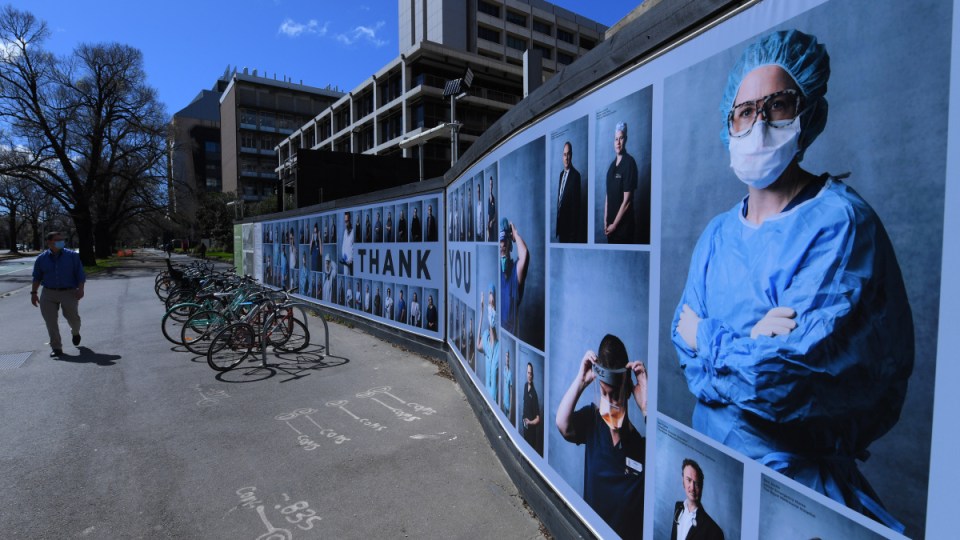 Victorian COVID cases have fallen again, but there were another 22 deaths reported on Tuesday. Photo: AAP

Victoria has declared a code brown emergency for all Melbourne hospitals and six regional hospitals as the system buckles under COVID-19 admissions and staff shortages.

A code brown is declared when additional capability and capacity needs to be mobilised to receive an influx of patients due to an external emergency.

The infections confirmed by the state health department on Tuesday came from 11,747 from rapid antigen tests and 8433 from PCR tests.

It is the second consecutive day case numbers have declined in the state.

Tuesday’s patient numbers were down 77 from Monday.

The number of people in intensive care has fallen by two to 127, though 43 people are now on ventilation, an increase of five.

The decision on a code brown for hospitals was flagged last Wednesday, when the state had just under 950 COVID patients. On Tuesday, Acting Health Minister James Merlino said more than 4000 hospital staff were furloughed across Victoria, either because they were COVID-positive or they were close contacts.

“We’ve been saying for some time that our hospital system is under extreme pressure and the risks we’re seeing now in hospitalisations are testament to that,” he said.

A code brown allows hospitals to defer non-urgent services and cancel leave for staff. It will also allow a centralised approach aimed at easing pressure on individual hospitals by redeploying staff and moving patients.

Mr Merlino said hospitalisations were still to peak in Victoria – and expected to rise at about 100 people a day.

“Whilst it’s good to see hospitalisations slightly lower today, you’ve got to look at the trend and where we’re going to head to,” he said.

“They’ve basically been steadily climbing over the last week or so and we know that the biggest increases are yet to come.”

The code brown will come into force from midday on Wednesday.

“Health services are well prepared for this. They have their code brown plans in place and they know what to do,” Mr Merlino said.

Victoria has previously used code browns in individual hospitals, including during Melbourne’s deadly thunderstorm asthma event of 2016. But it is the first time a code brown has been imposed statewide.

“Health services have been considering calling a code brown for
some time but we believe that now is the right time to action this,” he said.

“Added to this, we’re all experiencing challenges with our supply chain.”

On Monday, chief health officer Brett Sutton said hospitalisation numbers were yet to peak in Victoria. He predicted that might not be reached for a month.

Professor Sutton said there was a lag of about two weeks between case numbers and hospital admissions, and three weeks for that to translate to ICU figures.

The sound of summer cricket is about to change as Ian Chappell retires after 45 years
Victoria reports 22,429 cases, six deaths
Today's Stories