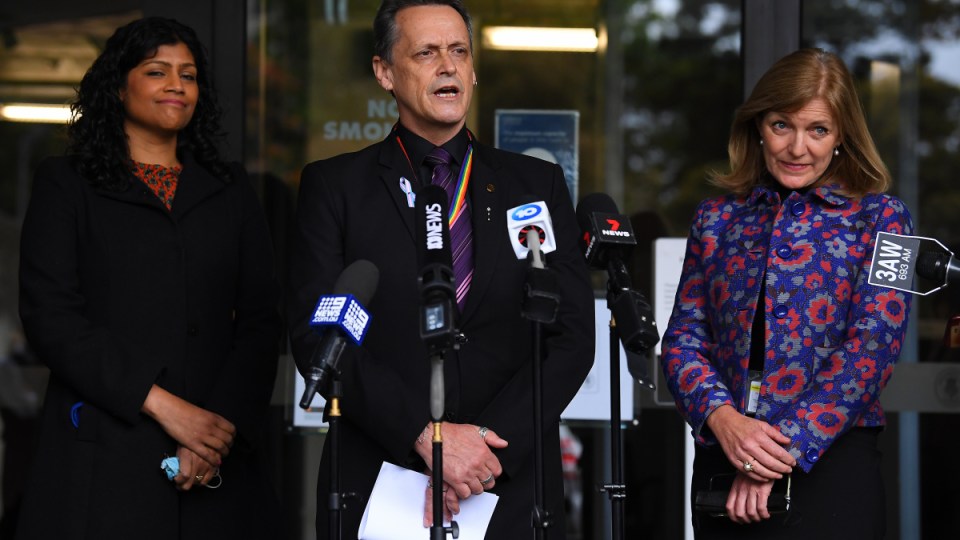 The daughter of a key Victorian crossbench MP has been violently attacked in the street following protest ‘threats’.

Animal Justice Party MP Andy Meddick said his “worst fears had turned into reality” with the attack on his 25-year-old daughter early on Friday morning.

“Last night, my beautiful daughter Kielan was attacked in the street. I was with her in hospital until the early hours,” he said on Friday.

“My deepest gratitude is with those nearby who helped her when she was most in need, and to the wonderful carers and health workers who have treated her since.

Victoria Police later said that at about 11pm Thursday night, a woman was spray painting over a poster on Smith St in Fitzroy, when a man approached her and they argued, before the woman threw a spray can towards the man as she tried to leave.

According to police, the man threw the spray can back at her, striking her in the back of the head.

The investigation into the incident is ongoing.

Mr Meddick denied police’s characterisation of events, saying his daughter threw the can behind her as she ran away after being confronted and abused by the man.

Ms Meddick posted on Instagram that she had been chased down and attacked by a man for being “political” on Smith Street in Fitzroy.

“I called for help and he threw a spray can at my head. I started bleeding a lot,” she said.

Ms Meddick ran into a bar, where the staff treated her wounds before she was taken to hospital. She said she had a three-centimetre gash on her head, which required stitches and glue.

“I’m home safe now, thank you so much for all the support,” Ms Meddick said.

Mr Meddick is one of several crossbench MPs in Victoria who have been crucial to the state government passing its controversial pandemic laws. He has previously spoken out about threats to his family and staff in the increasingly divisive debate on the legislation.

Last week, he revealed protesters had targeted his house.

“It’s a genuine fear … that we will see re-enactments of what has occurred in the UK where MPs are actually killed and this is something that I’m desperately trying to avoid,” he said at the time.

On Friday, he said he had reason to believe the attack on his daughter “could be linked to my role as an MP and the positions I have taken on the pandemic response”. Police are investigating the attack, but are yet to confirm a potential motive.

The Public Health and Wellbeing Amendment (Pandemic Management) Bill 2021, which was being debated in the Victorian upper house on Friday, gives the premier the power to declare a pandemic and extend it for three months at a time.

But there have been ugly protests against the bill – including Monday night, when a gallows was brought out and death threats were made against Premier Daniel Andrews.

The return of disgraced Labor MP Adem Somyurek earlier this week also sank the state government’s deal with the crossbenchers to pass the legislation. It has been forced into negotiations with eight other crossbench MPs to try to get the numbers to pass it into law.

As Victorians woke to their first day with almost no coronavirus rules, Mr Andrews praised their vaccination efforts but accused the PM of sending mixed messages to protesters.

“It’s taken too long for people just to be straight. They’re sending mixed messages and that is dangerous,” he said.

“I don’t want anyone, whether it’s people who are weak leaders or extremists, to take away from what Victorians have built and sacrificed.”

On Thursday, Mr Morrison said that while he had no tolerance for violent protesters, it was time for state governments to step back and for “Australians to take their lives back”.

He then attacked state-imposed vaccine mandates, drawing criticism from leaders in Queensland and Western Australia.

On Friday, he again condemned the protests against Victoria’s pandemic laws. But he also doubled down on comments that people have had enough of government-imposed virus rules.

“I completely and totally continue to denounce any violence, any threat, any intimidation – and any suggestion that I have not done that is completely false,” Mr Morrison said.

“I have sympathies for Australians who have had a gutful of governments telling them what to do over the last two years.”

After news emerged of Ms Meddick’s attack, Mr Morrison was also quick to condemn it through a statement on Facebook.

“This is not on. It has no place in Australia. I join with all Australians in unequivocally condemning these actions,” he said.

“This is not just an attack on an innocent person but an attack on our very democracy my thoughts – and those of all Australians – are with you, Andy, and your family.”