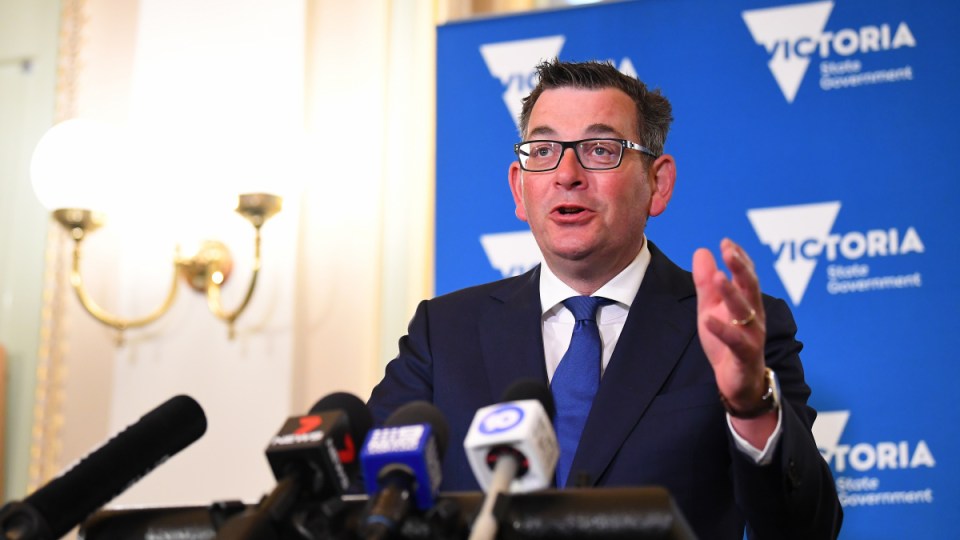 Victorian Premier Daniel Andrews has announced a widespread easing of virus rules from midnight Thursday, declaring “no more caps, no more closures” in the state.

It came with Victoria poised to tick over 90 per cent of over-12s fully vaccinated on Saturday or Sunday.

The state had 1007 new COVID cases on Thursday, the first time it has had more than 1000 daily cases since last weekend. There were also 12 more fatalities.

There are 13,814 active cases of the virus in Victoria, and 445 people have died during the current Delta outbreak.

There are still 337 patients with the virus in Victorian hospitals, including 128 in intensive care. But Mr Andrews said numbers were continuing to fall.

“The fact that we have got vaccinated means that we are avoiding hospital admissions and … we have been able to end lockdowns and open up. We will be able to keep the place open,” he said.

The new rules will apply for fully vaccinated Victorians. From midnight Thursday, they will also be able to dance in clubs, there will be no home visitor limits and no density limits for cafes and restaurants.

“Because 90 per cent of Victorians have gone and gotten vaccinated, so many of these rules, almost all of them can fall away,” Mr Andrews said.

Masks will remain for a few more weeks in retail, for hospitality workers, on public transport and for primary school staff, visitors and students in years three to six.

From December 15 retail customers will no longer need to wear masks, unless there is a significant jump in hospitalisations.

Indoor events can host up to 30,000 punters, however one-off approval is needed to exceed that capacity.

Events held outdoors can exceed 30,000 attendees if they publish their COVIDSafe plans.

The changes mean the Boxing Day Test and Australian Open will be able to proceed at full capacity, subject to approval of the MCG and Melbourne Park’s plans.

“You will be able to go back to normal,” Mr Andrews said.

“You will have the normalcy you have missed.”

“This is a safe delivery of the national plan, I am not only proud of Victorians but also deeply grateful.”

Thursday’s announcement came as the Andrews government launched a desperate bid to save its controversial pandemic laws.

But disgraced former Victorian Labor MP Adem Somyurek threw a grenade into the negotiations late on Wednesday. His parliament suspension was lifted after he provided his COVID-19 vaccination status – paving the way for him to potentially vote down the bill.

Debate on the Public Health and Wellbeing Amendment (Pandemic Management) Bill had been set to resume on Thursday, although a final vote was unlikely before Friday.

Mr Somyurek has publicly declared he will vote against the legislation, killing it and throwing the state into limbo, as the current state of emergency that the bill will replace expires on December 15.

The state of emergency and new bill allow for the government to continue enforcing COVID-19 pandemic public health measures.

In an opinion piece published in the Herald Sun, Mr Somyurek said he planned to vote against the bill. In its current form, it gave too much power to the premier and state government, lacked independent oversight and “appropriate mechanisms” to scrutinise the new powers.

A no vote by Mr Somyurek would result in a tie, meaning the bill would have to be reintroduced in parliament’s lower house.

Upper house crossbencher MP Fiona Patten said the bill will likely be defeated since the numbers would be split 19-19, which means it would fail.

“Who knew that parliament could be used for such exacting revenge on former colleagues?” the Reason Party MP said outside parliament.

“Now we’re in a very precarious situation that we may have no controls and no regulations during a global pandemic.”

The bill has become a lightning rod for anti-lockdown and anti-vaccination groups, who have occupied the steps of state parliament this week.

They gathered around a wooden gallows on Monday evening chanting “freedom”, “traitor”, “kill Dan Andrews” and “hang Dan Andrews”, as an inflatable doll depicting the premier was thrown onto the structure.

Victoria Police said on Thursday they were investigating several of the threats.

Mr Guy said he would speak to his party members on Thursday about attending the protests.

“You won’t be seeing anyone back out there,” he said.