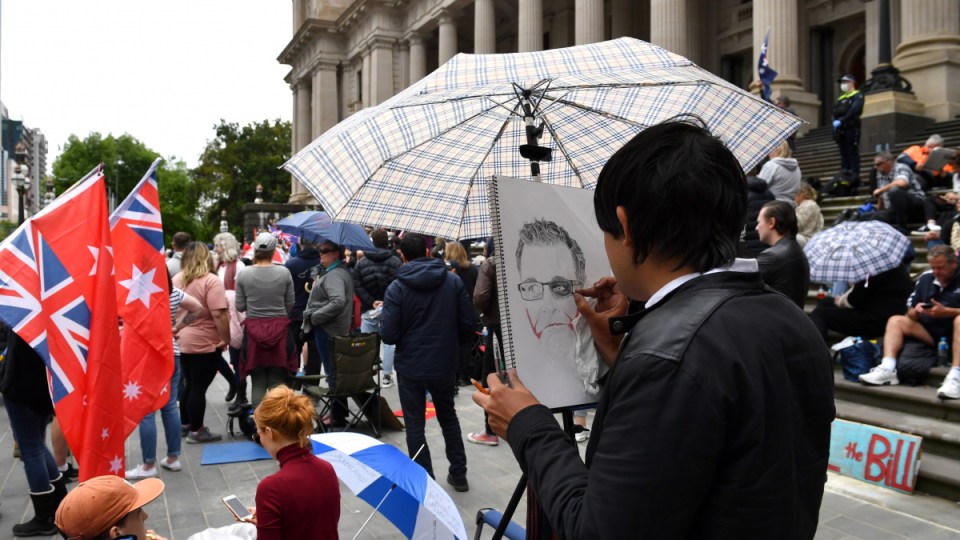 A man draws a portrait of Victorian Premier Daniel Andrews at the pandemic protest on the steps of state parliament. Photo: AAP

Debate on the Public Health and Wellbeing Amendment (Pandemic Management) Bill began in the upper house on Tuesday afternoon and went well into the night.

The bill has become a lightning rod for anti-lockdown and anti-vaccination groups, with hundreds of protesters planning to camp out on the steps of parliament for the duration of the debate.

A video posted on social media shows the protesters gathered around a wooden gallows chanting “Freedom”, “Traitor”, “Kill Dan Andrews” and “Hang Dan Andrews” while attempting to place the head of an inflatable doll of the Premier through the noose.

There has also been shocking footage of other protesters calling for Mr Andrews to hang, threatening to storm the parliament and abusing journalists.

“I’ll not be deterred from the work I’m doing to keep every family safe,” Mr Andrews said on Wednesday.

“I wouldn’t want the appalling, the disgusting and the potentially criminal behaviour of a small number of people to detract away from the amazing job that so many Victorians have done.

“It is so unfair for a small, ugly mob to be taking attention away from the more than 90 per cent of Victorians who have had a first dose and will soon have had a second dose.”

The comments came as Mr Andrews’ wife, Catherine, also responded to the fallout from the ugly scenes on Monday night.

“We have received so many beautiful messages today, from all over,” Mrs Andrews wrote on Twitter on Tuesday.

A Victoria Police spokesman said on Tuesday they were yet to receive a complaint about the incident. If the premier or another person made a complaint to police and felt it was a legitimate threat, police would investigate it in line with the Crimes Act, he said

Deputy Premier James Merlino said it was up to Victoria Police to decide if they should investigate, but demanded those on the other side of politics to stop encouraging the protests.

“What we’ve seen on the steps of parliament – threats of violence threats to kill – this is extremist behaviour,” he said on Wednesday.

“For those in the Liberal Party to … actively encourage this behaviour, I think it would be anathema to the people of Victoria.”

Barriers were being set up at the Victorian parliament early on Wednesday as the protesters continued their vigil. They have vowed to remain until the laws are dumped.

However, the bill is all but guaranteed to pass after the state government made amendments to secure the support of three crossbench MPs.

Debate on the package is on hold as the chamber deals with non-government business. It is expected to resume on Thursday.

The laws would give the premier and health minister the power to declare a pandemic and make public health orders.