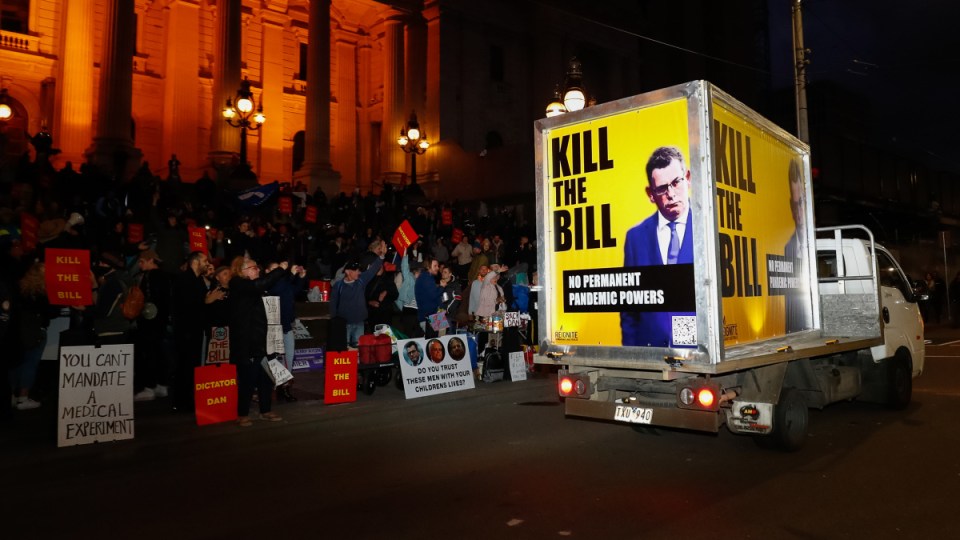 The government has made seven amendments to the Public Health and Wellbeing Amendment (Pandemic Management) Bill following negotiations with key crossbench MPs.

It comes after anti-vaccination protesters displayed a makeshift gallows outside Victoria’s parliament house on Monday night in a disturbing gesture towards the Premier.

Protesters camped outside parliament before government officials met to discuss the Pandemic Management Bill, jeering as a blow-up replica of Mr Andrews was placed on the gallows on the steps of Parliament.

Footage circulated online of the demonstrators capturing the incident.

The bill, which gives the premier and health minister the power to declare a pandemic and make public health orders, had been criticised for being too broad and lacking in parliamentary oversight.

A controversial clause that gave the health minister the ability to make orders based on a person’s “characteristics, attributes or circumstances”, such as age, location, vaccination status and occupation, also raised concern.

“The thing about these laws and our management of this pandemic is it’s not a game. It’s very much about keeping people safe,” he said.

Amendments to the legislation will clarify that the premier needs “reasonable grounds” to declare a pandemic, and the application of orders based on characteristics “must be relevant to the public health risk”.

The health minister will be required to confirm the role the Charter of Human Rights and Responsibilities has played in their decisions.

The advice behind any orders issued must be made public within a week rather than a fortnight, while the parliament’s Scrutiny of Acts and Regulations Committee will be given the power to consider any order when it is made, instead of after it is tabled.

Maximum fines for people who breach public health orders have been halved.

Health Minister Martin Foley said the amendments were the result of consultation with public health, human rights and law experts.

“We’re confident that the package we have put together will both secure the rights of Victorians but, more importantly, keep Victorians safe in any future pandemic,” he said.

The government is relying on the support of Animal Justice MP Andy Meddick, Reason Party MP Fiona Patten and Greens leader Samantha Ratnam to pass the bill in the Legislative Council.

Mr Meddick called on Opposition Leader Matthew Guy to unequivocally condemn members of his party who “legitimised noose-wielding maniacs” after protesters camped outside parliament overnight in opposition to the bill.

Mr Guy said later he did condemn the shocking display.

“Some of the things we saw last night are ridiculous. Of course we condemn it. There’s no place for any kind of behaviour like that,” he said.

But, while labelling some of the behaviour “ridiculous” and “stupid”, Mr Guy declined to rebuke Liberal MPs Bernie Finn and David Davis who spoke at recent anti-pandemic bill rallies.

“That’s a dangerous place in democracy to say we’re going to pick and choose who can’t be addressed at a rally,” he said.

Concerns remain about the bill.

Ombudsman Deborah Glass told ABC radio on Tuesday she would no longer be able to review decisions made under the laws because they would be made by ministers, not public servants.

Ms Glass said she would have liked to have seen a judicial body overview of the legislation.

The debate is expected to begin on Tuesday and could continue well into Thursday night, with MPs told parliament could sit an extra day to ensure the bill passes.

The opposition plans to move 18 amendments, including limiting extensions to pandemic declarations to one month, subject to a three-fifths majority vote of both houses of parliament, and the scrapping of the characteristics clause.