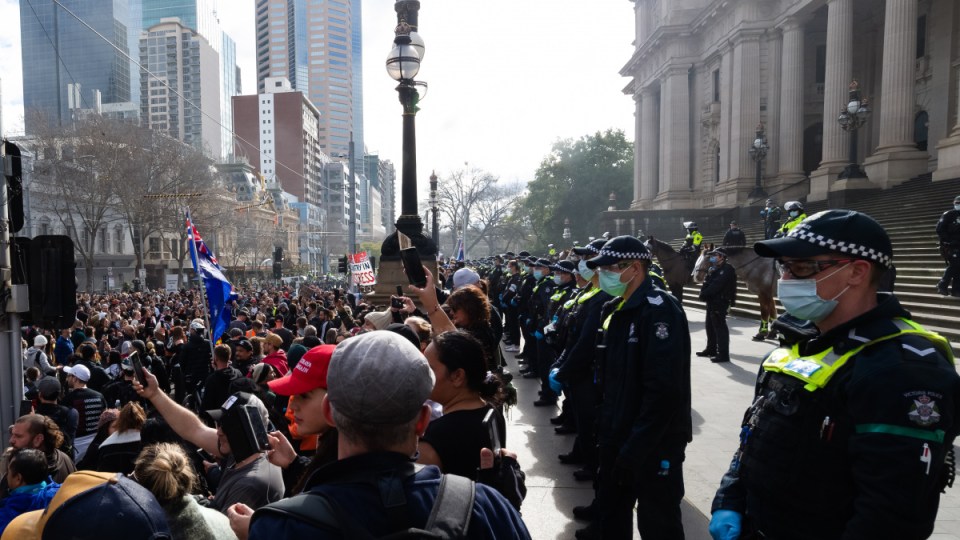 Protesters and police outside the Victorian parliament at a anti-lockdown rally in July. Photo: Getty

The Public Health and Wellbeing Amendment (Pandemic Management) Bill 2021, which is set to be debated in the Victorian upper house next week, gives the premier the power to declare a pandemic and extend it for three months at a time, for as long as considered necessary.

During a pandemic, the health minister will be given “broad powers” to introduce public health measures such as lockdowns, mask mandates and quarantine requirements. In Victoria, such powers currently reside with the chief health officer, who is not an elected official.

The government is relying on the support of Mr Meddick, Reason Party MP Fiona Patten and Greens leader Samantha Ratnam to pass the bill in the Legislative Council.

The trio has been involved in lengthy consultation with the government about the bill, which is intended to replace state of emergency powers that expire on December 16.

But the proposed laws have been criticised by the opposition, with leader Matthew Guy repeatedly referring to them as “the most dangerous piece of legislation we’ve seen”.

The Victorian Bar, the Law Institute of Victoria and a prominent group of lawyers have also raised concerns the bill is too broad and gives the government too much power.

While protesters have gathered outside parliament on several occasions, brandishing posters with slogans such as “Kill the bill”.

Mr Meddick believes the debate has become too heated, saying the opposition and other independent MPs are deliberately misinterpreting the bill.

“This is absolutely deplorable behaviour that could potentially see scenes here in Victoria reminiscent of what we saw in the US Capitol,” the Animal Justice Party MP told ABC Radio Melbourne on Thursday.

“It’s a genuine fear … that we will see re-enactments of what has occurred in the UK where MPs are actually killed and this is something that I’m desperately trying to avoid. The heat does need to be taken out of this.”

Mr Meddick cited a man armed with a baseball bat trying to break into parliament during protests on Saturday, while a crossbow-wielding man was arrested at the front steps on Monday.

Mr Meddick said he and his family have been threatened, and his office received a condom in the mail with a letter stating “Enjoy some of my fresh herpes!”.

On Wednesday, Premier Daniel Andrews was forced to cancel a press conference in Bendigo on police advice, while chief health officer Brett Sutton and COVID-19 commander Jeroen Weimar were escorted by officers through a crowd of protesters on the steps of parliament on Monday.

The Department of Parliamentary Services in its 2020/21 annual report, tabled last month, said MPs were increasingly targeted with threats and vandalism amid the pandemic.

Parliamentary security responded to 112 incidents at ministerial offices, an increase of 124 per cent from the year prior.

Paul Bongiorno: It won’t be easy for Anthony Albanese, but he says he’s up for it
More than 1000 virus cases in Vic, 14 deaths
Today's Stories