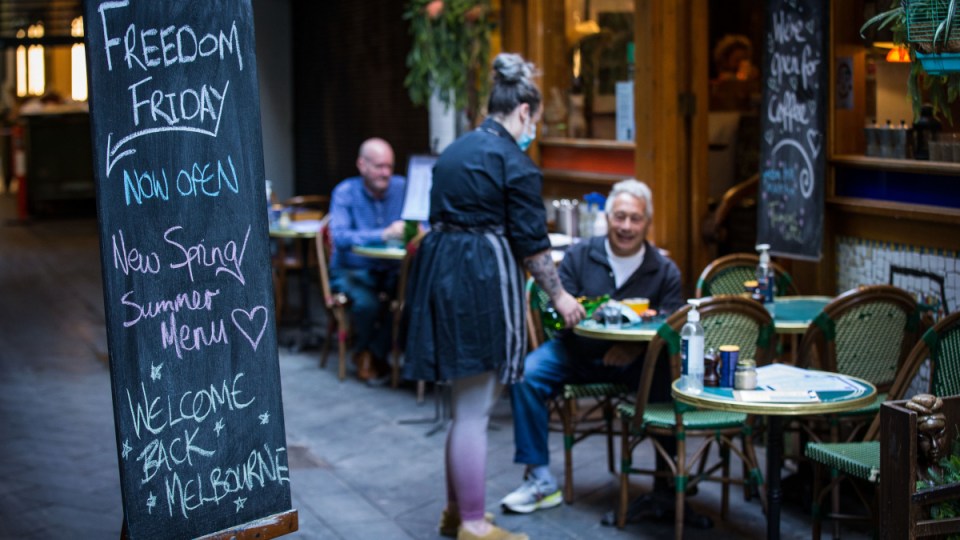 Victoria's COVID cases jumped back above 1000 on Friday, with another three deaths reported. Photo: Getty

Victorians enjoying their first steps out of lockdown can look forward to even more freedoms returning “quite soon”, as the state rockets towards an 80 per cent vaccination rate.

Premier Daniel Andrews said the state had passed 90 per cent first-dose vaccinations on Friday, as Melbourne and Mildura ended their lockdowns.

“We believe not this weekend but the weekend after, we will go past 80 per cent double-dosed and deliver the items in the roadmap of our national plan – and if we can go further, we will make announcements to that effect,” he said.

“I know everyone wants to know what’s happening next weekend, and they’d like to know today. Today’s not the day to make those announcements. But quite soon … We will be out quite soon to clarify what we hope can happen at the end of next week.”

Victoria began to reopen at midnight on Thursday after reaching its target of 70 per cent of over-16s fully vaccinated. The next significant step comes at 80 per cent, forecast for as soon as October 30 – up to a week earlier than initially predicted in modelling for the state government.

It includes significant changes such as larger gatherings, shops reopening and Melburnians being allowed to again travel to regional areas.

“It’s so, so important that we finish this off, that we don’t sort of get to the point where we think that 70 per cent is near enough,” Mr Andrews said.

“We’ve got to get to 80 per cent. Indeed, if we can push beyond that and get to 90 per cent double-dosed, then we’ll have even more options.”

Melbourne’s reopening began on another day of high COVID numbers for Victoria, with 2189 local infections. There were also 16 more deaths – five men and 11 women aged from their 60s to their 90s – taking the toll from the state’s current outbreak to 203.

There are 784 patients in the state’s hospitals – and Mr Andrews urged Victorians to be aware of the increasing workload on health-care workers as lockdowns ended.

“Today, just spare a thought – and, for a few days to come yet – for our nurses, our ambos, our doctors, the whole team across our health system,” he said.

“Seven hundred or 800 patients doesn’t seem a lot. But 700 or 800 patients who’ve got a wildly infectious disease is a challenging thing to have to manage. Those numbers are going to grow as we open up.”

Chief health officer Brett Sutton also had a warning, telling Victorians they “can and absolutely should punch through” to 90 per cent fully vaccinated.

“As we start to reopen, there will be more COVID in the community really than at any other point in time,” he said.

“You can get mild illness and you can pass it on. So we have to bear in mind those other really important protections: Checking in, wearing a mask will be really important, and on days like today, opening every door and window in sight to let that fresh air through.”

Arrivals into Victoria will have to test negative to the virus before their flight and then 24 hours after arrival.

“No hotel quarantine, no iso – you’ll be able to go about your business,” he said.

“The reason for that is that at 80 per cent, 90 per cent [fully vaccinated] – which is where we’re going to get to – we are as protected as we can be.”

Children aged under 12 and those with a medical exemption will also not be required to quarantine.

About 250 unvaccinated people will be able to return each week, although they will be required to spend 14 days in hotel quarantine.

Post-lockdown Victorians on brink of even more returned freedoms