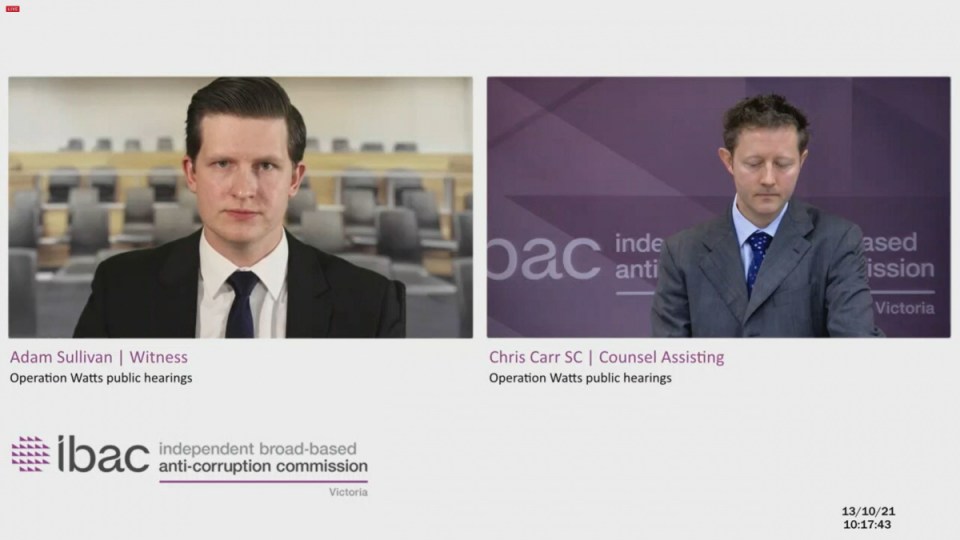 Adam Sullivan told the Independent Broad-based Anti-corruption Commission on Wednesday he spent up to $14,000 from Mr Somyurek’s electorate office budget on stamps, which were used as part of Mordialloc MP Tim Richardson’s 2018 re-election campaign.

Mr Sullivan said he was told by another staffer, Nick McLennan, in early 2018 to start purchasing stamps from the electorate office budget of Mr Somyurek.

“The ostensible purpose was for non-political purposes for Mr Somyurek’s office but what actually would occur was those stamps would then be rerouted and distributed to Tim Richardson’s re-election campaign in Mordialloc,” he told the inquiry.

“It was suggested that the purchase of these stamps take place in increments, nothing that would be conspicuous to the department of parliamentary services.

Mr Sullivan said although Mr Somyurek did not directly ask him to purchase the stamps, it “didn’t seem like it was the sort of thing that would be frowned upon” by the MP because of other behaviour in the office.

He said during his time in Mr Byrne’s office he would handle “wads of cash”, given to him by MPs and aspiring MPs to pay for or renew other people’s Labor memberships.

These memberships helped the faction gain influence in Melbourne’s south-east and to ensure their preferred candidates were preselected.

The practice, known as branch stacking, is not illegal but is against Labor party rules.

IBAC is investigating whether public funds were used for such work.

Ms Schrieber said she had not been asked to do so when she first joined the office in January 2019. However, between June and July of that year “80 per cent” of her time involved dealing with ALP memberships and factional work .

The trio were responsible for assessing applications in Melbourne’s west, north and south-east.

Mr Byrne told the inquiry on Tuesday he was aware of branch stacking in other factions, including Premier Daniel Andrews’ socialist left in Melbourne’s south-east.

Mr Andrews said again on Wednesday he had not attended factional meetings since he became Victorian Labor leader in 2010 and had always followed party rules.

Shadow Attorney-General Tim Smith said Mr Andrews must be called to give evidence during the five-week IBAC hearing.

“Mr Andrews, come clean, tell the people of Victoria about what you were getting up to when you were a local MP and minister,” Mr Smith said outside parliament on Wednesday.

Speak to the dead: Amazon Alexa to use the voice of your lost loved ones
Victorian cafes, shops to be transformed into vaccination clinics
Today's Stories