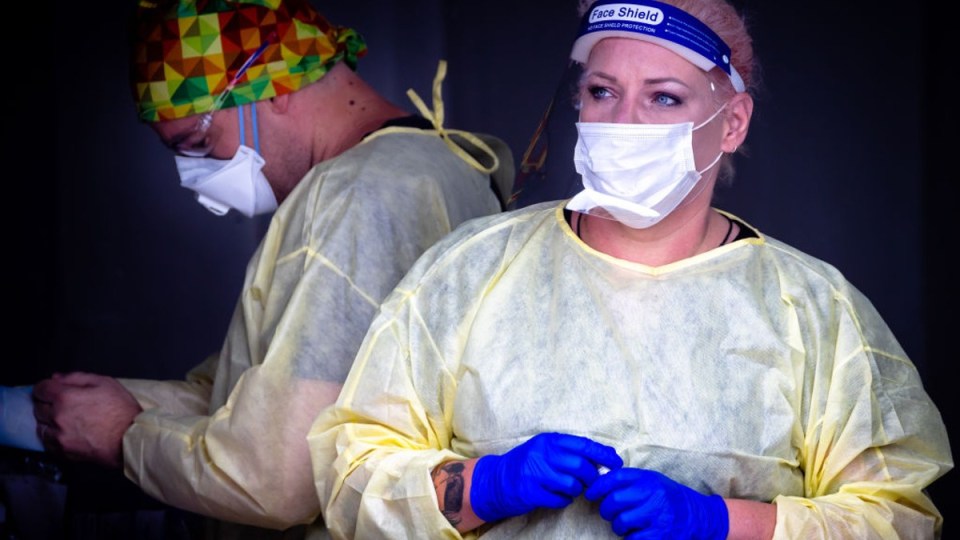 It’s not much consolation for Victoria – just 75 fewer cases announced Sunday than the record 1965 COVID infections identified 24 hours earlier – but it’s some sort of hope that the pandemic has plateaued.

A false hope, according to experts who predict the daily increase in cases is destined to resume over the days ahead.

Victoria on Sunday added 1890 COVID-19 infections to its caseload and an additional five deaths over the previous 24 hours.

Expectations were that the state would become the first to exceeded 2000 reported cases in a single day following a record 1965 infections on Saturday along with five fatalities.

Asked if Victoria would reach 3000 cases a day by the end of October, Health Department Deputy Secretary Kate Matson told reporters: “At this point in time, we are on track in terms of hospitalisations and case numbers.”

The state is currently managing more than 18,340 active cases.

Almost 40,000 vaccines were administered across the state on Saturday, while 74,105 tests were conducted.

Meanwhile, tracing efforts have been scaled back to focus on positive cases and primary contacts.

Secondary close contacts will no longer be required to isolate, as authorities change their processes to manage the escalating case numbers.

Ms Matson said that since Victoria is no longer pursuing a COVID-zero strategy, about 16,000 secondary contacts are being allowed to leave isolation this weekend.

“In an environment where we are unfortunately close to 2000 cases a day, the public health risk isn’t there in terms of secondary close contacts when you weigh it up with the operational impact,” she said on Saturday.

“So we want to dedicate our resources to primarily close contacts, confirmed cases and sensitive exposure sites.”

New modelling on the way

Ms Matson said the Burnet Institute was working on fresh modelling, given the high cases numbers, expected to be released later this week.

Vaccination rates continue to rise in Victoria. As of Friday evening, 85 per cent of over 16s had one dose and 57 per cent were fully vaccinated.

A small number of protests were held in Melbourne on Saturday, with police arresting three people and fining 27 for breaching public health orders.

In Mildura, residents are entering day two of a seven-day lockdown to contain growing cases, with active infections in the area growing to 37.

Health officials in three states are on alert after a Victorian flight attendant worked on return Virgin flights from Melbourne to Adelaide, Sydney and Newcastle while infectious from October 4 to 6.

Victoria’s soaring COVID numbers pause before the next predicted surge