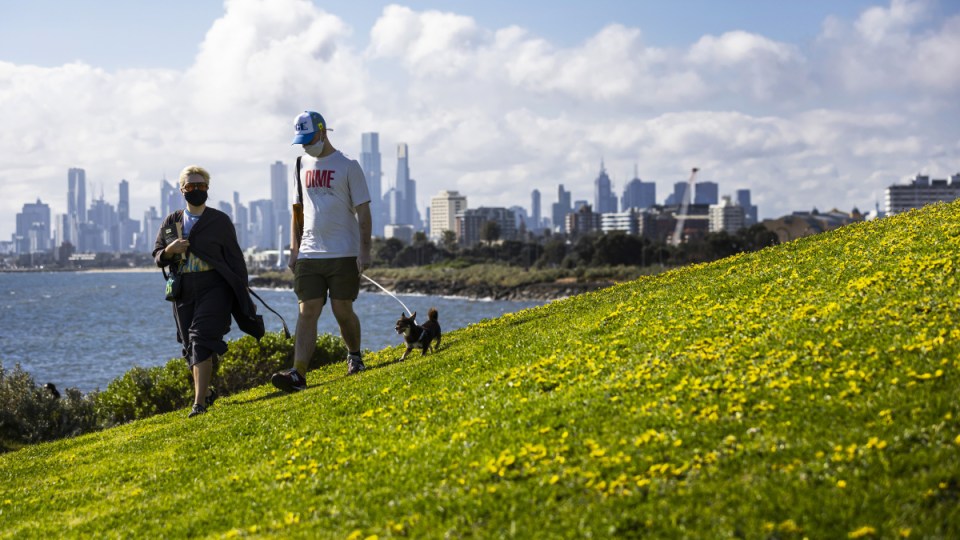 Victoria's virus cases have spiked to another high – with warnings of more to come before its outbreak peaks. Photo: Getty

Victoria has reported another 1838 local COVID cases and five deaths, as the state stays the course with its lockdown exit strategy.

Friday’s update from the state health department is the highest daily tally of any state or territory since the pandemic began.

The deaths take the toll from the current outbreak to 75.

There are 620 COVID patients in Victorian hospitals. They include 114 in intensive care and 76 on ventilators.

On Friday, Ambulance Victoria confirmed it would introduce new measures from next week as it braced for a growing number of COVID patients.

For the first time in its history, two paramedics will no longer be deployed in each ambulance.

A single paramedic could instead be joined by a driver from the Australian Defence Force, St John Ambulance Australia, State Emergency Service or a student.

The service has had four of its five busiest days in history in the past two weeks.

More than 77,554 Victorians were tested for the virus in the 24 hours to Friday morning, while 36,600 vaccinations were administered at state-run sites.

Some 55 per cent of Victorians aged above 16 are fully vaccinated against COVID-19, while 84 per cent have received their first dose.

Once 70 per cent of the state’s population above 16 is fully vaccinated, expected about October 26, Melbourne’s curfew will ease, the travel limit will be expanded and venues can open outdoors to the fully vaccinated.

But Victorians will have to wait until the 80 per cent double-dose target is reached, forecast for November 5, for significant changes including Melbourne hospitality reopening for seated service and visitors to be allowed in homes.

In NSW, fully vaccinated adults will receive a swathe of new freedoms from Monday, with up to 10 adults allowed to visit homes, and people allowed to eat at restaurants and go to the gym.

On Thursday, Premier Daniel Andrews said he had no plans to alter Victoria’s roadmap out of lockdown given the high daily case numbers.

The opposition has called for a return of customer density limits at the 70 per cent target, paving the way for hospitality venues to open indoors.

Dr Katherine Gibney from the Doherty Institute said the state should expect more cases in coming weeks, putting strain on the health system.

“The modelling does show the numbers will go up in the next couple of weeks before they start to plateau and turn around,” she told the Nine Network on Friday.

“There is no doubt there is a strain on the hospital system already and that is going to get worse but it is being managed in terms of spreading cases around among Victorian hospitals.”

Meanwhile, a Victoria Police officer has been admitted to hospital with COVID-19 after working at recent anti-vaccine protests in Melbourne CBD.

At least two officers from an inner-city police station are infected with the virus, while 25 police have been stood down due to potential exposure, the police union said.