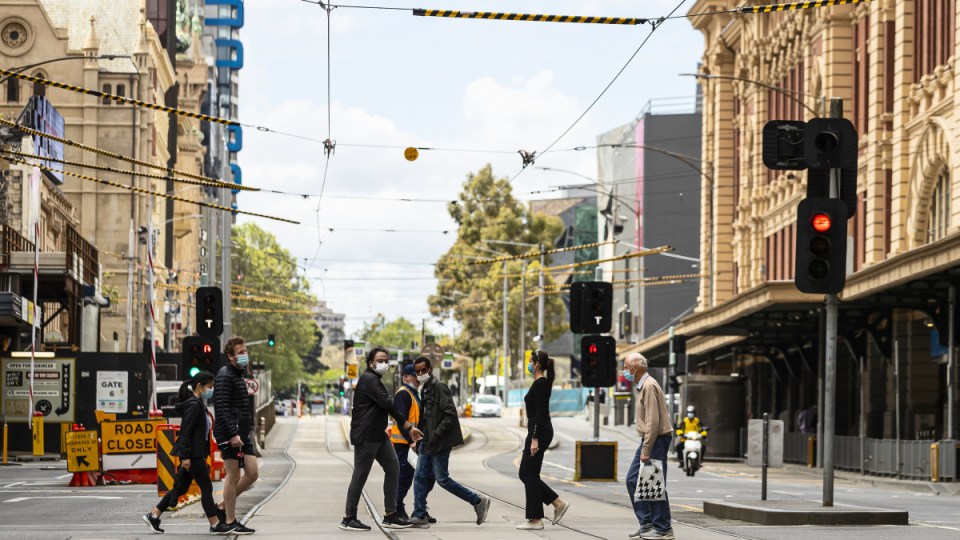 Victoria's COVID cases have leapt to a new record, with the virus being found across Melbourne. Photo: AAP

Victorian authorities have sounded the alarm about COVID cases surging across Melbourne’s south-east.

The state posted a record 1736 local infections on Tuesday – the highest daily tally yet for anywhere in Australia since the pandemic began.

There were also four more deaths, taking Victoria’s toll from its latest outbreak to 57.

It was also a record day for COVID cases across Australia. There were another 608 infections in NSW, 33 in the ACT and two in Queensland.

Tuesday is the sixth day in a row that Victoria has had more than 1000 cases, and its seven-day average is now 1340.

Health authorities say the coronavirus is being detected in households and suburbs where it had previously not been seen.

On Tuesday, there were 370 new infections in Melbourne’s south-east, where case numbers have spiked in the past week. They included 131 infections in the local government area of Casey, which takes in suburbs such as Cranbourne, Hampton Park, Clyde and Berwick.

“As we’ve said before, COVID is around everywhere in metropolitan Melbourne,” she said.

However, Victorian authorities were “not surprised” by Tuesday’s jump – up from 1377 infections on Monday – given the way the virus had started to spread.

Victoria’s infections also spiked just under a week ago, with authorities blaming that jump on illegal parties and barbecues to celebrate the AFL grand final weekend. Health authorities said later that it was likely ongoing transmission as a result of those events had contributed to Tuesday’s jump in  cases.

Ms Matson said there was also “significant community transmission” of the virus, with people contracting it from strangers.

On a brighter note, there are further signs that outbreaks in Melbourne’s hard-hit northern suburbs are beginning to stabilise. The area still accounted for 681 of Tuesday’s infections, while western suburbs had another 514.

Ms Matson said “concerningly”, the local government area of Brimbank, in Melbourne’s west, had doubled its daily tally in the past week.

Despite the leap in cases, Premier Daniel Andrews confirmed Victoria would stick with the national plan to ease rules once 70 per cent of people over 16 are fully vaccinated, which is likely on October 26.

There will be further freedoms at 80 per cent. That is forecast for about November 5 – although both dates might come forward if vaccination rates accelerate.

“It’s only a few weeks away,” Mr Andrews said.

“I don’t have any advice that sees us having to alter that [the roadmap] now.”

As of Tuesday, 83.2 per cent of Victorians over 16 were partially vaccinated while 53 per cent had received both doses.

Doherty Institute modelling, on which the national cabinet plan is based, has cautioned some level of restrictions might be needed if case numbers are still high when vaccination targets are met.

“We have more cases than we would like, but without a lockdown on at the moment we would have many many more cases and many more people in hospital.”

Elsewhere, Australia has broken through 80 per cent first-dose coronavirus vaccination coverage. More than 57 per cent of over-16s have received both doses.