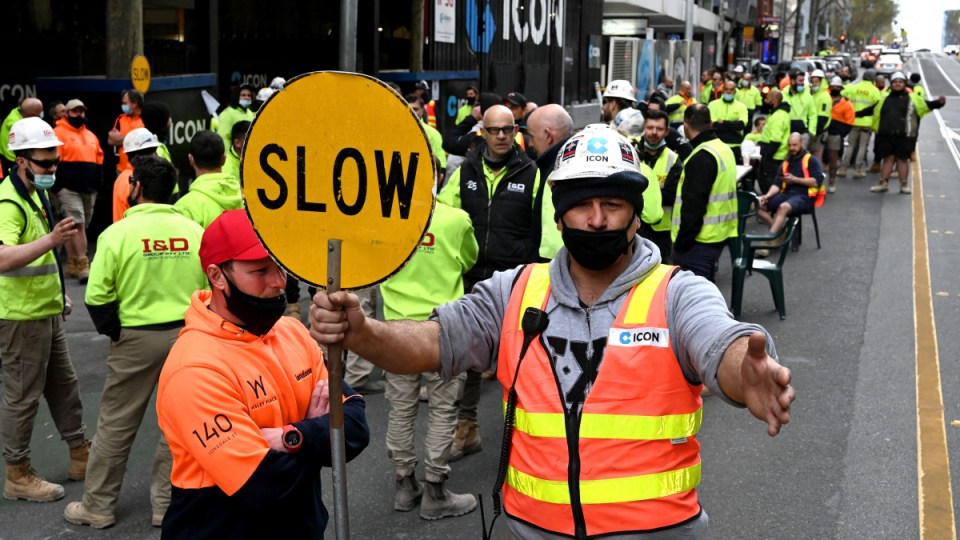 Construction workers can return to worksites in Melbourne after a two-week industry shutdown. Photo: Getty

Victoria has posted a record 1763 local virus cases and four deaths as tradies get back on the tools after a two-week construction shutdown.

The toll from the state’s current outbreak has risen to 57.

Tuesday was the sixth straight day of four-figure infections in Victoria, with the new daily record pushing the state’s active infections to 14,368. It is the highest daily tally yet for any state or jurisdiction in Australia throughout the pandemic.

More than 62,189 Victorians were tested for the virus in the 24 hours to Tuesday morning, while 35,253 vaccinations were administered at state-run sites.

Premier Daniel Andrews said 83.2 per cent of Victorians over 16 were partially vaccinated while 53 per cent had received both doses.

The latest figures come as construction workers were allowed to return to worksites on Tuesday, after the two-week shutdown in Melbourne and other locked-down areas.

All on-site workers must have at least their first dose of a coronavirus vaccine and be fully vaccinated by November 13.

All operators must formally attest their site complies with new industry health directions before reopening.

The industry-wide vaccine mandate, and other restrictions brought in to curb transmission, sparked a protest outside the CFMEU’s Melbourne headquarters on September 20, the day the state government announced the sector would down tools.

Chief health officer Brett Sutton said tens of thousands of construction workers had since come forward to meet the first-dose requirement, but could not say what proportion of the industry was vaccinated.

He said the building industry was ready for Tuesday’s restart, having learned a “hard lesson” and reflected on compliance issues with masks and tearooms.

There will be COVID marshals at every worksite across the state and workforce caps remain, except for outdoor state government projects.

In other developments, the lockdown of the regional LGA of Latrobe will end later on Tuesday.

“There are some new cases in Latrobe today … but we feel we have a good understanding of that outbreak, and we can move Latrobe to the regional Victorian settings from midnight tonight,” Mr Andrews said.

Elsewhere, final-year Victorian students were in school on Tuesday for the rescheduled General Achievement Test.

Some 33 VCE students from COVID-19 hotspots were among Monday’s 1377 new cases, after 8000 were tested in the lead up to the annual test.

They will not be able to sit the GAT, an annual three-hour test that does not count towards their ATAR results, but can take their exams at a later date.

Mr Andrews said there were 517 COVID patients in Victorian hospitals. Of those 101 are in intensive care, including 66 on ventilators.

How to save $50 off your food bill and still eat tasty, nutritious meals
Vic construction to restart after ‘lesson’
Today's Stories