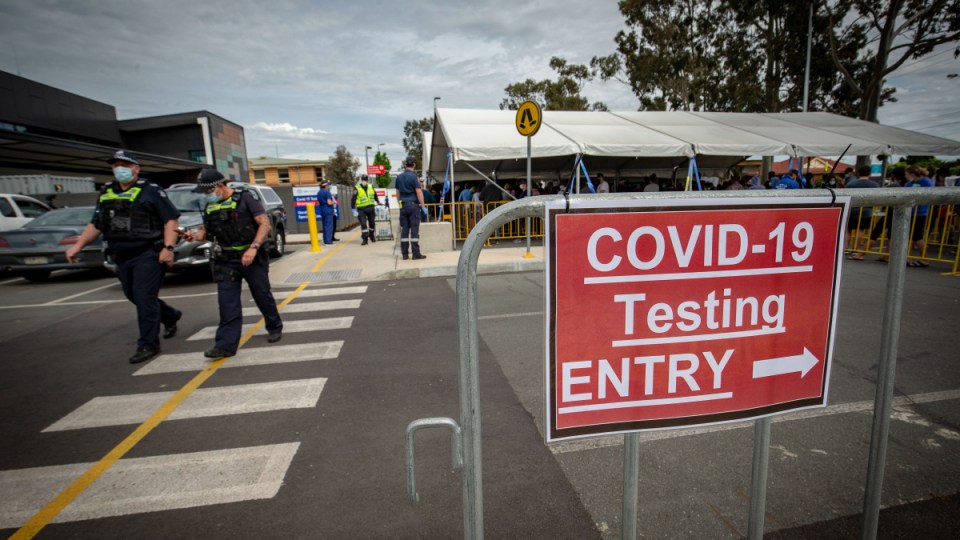 Victoria’s local virus cases have leapt to a pandemic high of 1438, with five more deaths on Thursday.

The daily tally is nearly 500 up on the 950 posted on Wednesday, and brings the total number of active cases in the state to 11,018.

The toll from the current outbreak has risen to 41. The five deaths reported on Thursday were a woman in her 70s and four men aged from their 60s to their 90s, all from Melbourne’s north.

Premier Daniel Andrews acknowledge the sudden jump would be a concern to Victorians – but said numbers would keep rising if people broke lockdown rules.

“These numbers are higher than we like. They are higher than they needed to be. I ask people with an absolute sense of respect and an
acknowledgment it’s hard and it’s been a very long journey. But we can see to the end now,” he said.

Household visits are banned in Victoria, but Mr Andrews suggested there were illegal gatherings last weekend that contributed to the spread. Up to 500 of Thursday’s cases are believed to be the result.

“Given what we know from interviews over recent days, plenty of these cases were completely avoidable,” he said.

“I’m not trying to blame anyone, I’m simply trying to explain … how could it have gone up by so much, so fast.”

“A third of our cases are due directly to those different types of social gatherings, as people have dropped their guard, and decided now it’s the grand final weekend, it’s the long weekend, we deserve a bit of a pay back, we deserve a nicer time,” he said.

“That has now translated into additional 500 cases from when we expected to see today.”

Mr Weimar said 60 per cent of Thursday’s cases were in new households – “jumping from known households to fresh territory” – and there had been a notable spike in Melbourne’s south-eastern suburbs. He described Thursday as “a challenging day”.

“If this trend is continued, if we see similar case numbers over the coming days, then we’ll go from just below the mean on the Burnet projection, we were tracking favourably, we’ll jump to the worst quarterial,” he said.

Elsewhere, Victoria will officially reduce the gap between Pfizer doses from six weeks to three from October 4. Mr Andrews said that was due to supply of the vaccines for the final week of October being guaranteed.

“Let’s all of us make the best decisions and not contribute to more virus. Not affect people that we love. Not make the work of our nurses harder,” he said.

“Let’s just see this through. It’s only a matter of weeks now. And then the lockdown will be off. That’s all what we have to be focused on.”

Victoria is also expecting to get 88,000 extra Moderna vaccine doses to be available from this weekend.

NSW will extend COVID lockdowns for 18 regional areas, and send another into a snap shutdown, after posting 941 more local cases on Thursday.

It is the state’s highest daily number of cases since it reported 961 last Sunday.

There were also six more virus deaths in the previous 24-hour period.

They were four men and two women aged from their 70s to their 90s, and take the state’s toll from its Delta outbreak to 337.

NSW Health said on Thursday that stay-at-home orders would be extended for a host of LGAs until October 11. They are: Bathurst Regional, Bourke, Central Coast, City of Broken Hill, City of Cessnock, Dubbo Regional, Eurobodalla, Goulburn Mulwaree, Kiama, City of Lake Macquarie, City of Lithgow, City of Maitland, City of Newcastle, Port Stephens, Queanbeyan-Palerang Regional, City of Shellharbour, City of Shoalhaven, and Wingecarribee.

A seven-day lockdown has also been ordered for the Snowy Monaro LGA from 3pm Thursday because of recent transmission of the virus in the area. NSW Health said the orders also applied to anyone who had been in the region since September 22.

The extended lockdowns came as Premier Gladys Berejiklian promised to bring forward the return of more freedoms as the state hit 80 per cent fully vaccinated.

“They won’t be major things but there will be tweaks. We’ll announce that at 70 per cent double dose,” she said on Thursday.

“There are a number of people in the community who have asked us to consider certain things and Health is considering those things and if it’s safe to do so we’ll be able to resume some of those activities at 80 per cent, as opposed to 1 December.”

NSW has reached 86.7 per cent of first doses in its residents 16 and over, and is at 62.9 per cent fully vaccinated.

“We’ll definitely hit that target by Monday, 11 October, of opening that day,” she said.

She also confirmed the earlier than planned return of students to classrooms. A staggered return will begin from October 18.

More than 47 per cent of 12-15-year-olds in NSW have had a coronavirus vaccine dose.