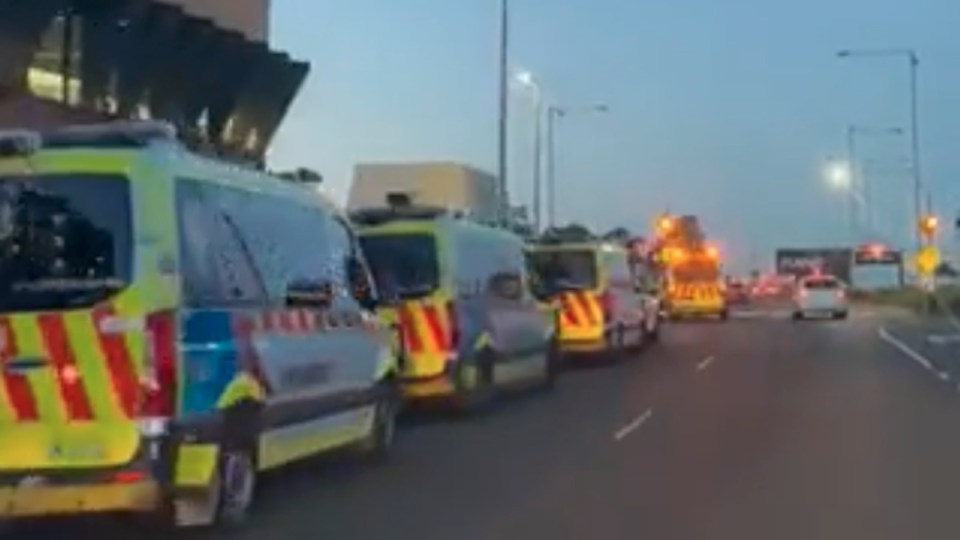 Victoria’s COVID cases and deaths have hit a new high for the current outbreak, as concerns grow about the escalating load on the state’s health system.

The state reported another 950 local virus cases on Wednesday, another jump on the 867 confirmed on Tuesday.

There were also seven more deaths, taking the state’s toll from its current outbreak to 36. They were women in their 50s, 70s and 80s  and a man in his 80s from Hume, in Melbourne’s north, and women in their 80s and 90s from Whittlesea, also in the city’s north.

Wednesday’s update came from 61,322 tests across the state, and leave Victoria with 9890 active COVID infections.

Elsewhere, it has emerged that Victorians calling triple zero are facing “unacceptable delays”, as the state’s health system struggles to keep on top of demand.

Victorian paramedics are transferring about 150 COVID-19 patients to hospital each day, only for them to be turned away.

“We’re having longer delays at hospital than we’ve ever had before and our capacity to respond and our performance has never been challenged as much as it has been over recent weeks,” he told ABC Radio Melbourne on Wednesday.

“If the growth in COVID cases continues, performance will be expected to get poorer unless we can do something about reducing the number of people coming into hospital.”

There has been ambulance ramping outside at least one major hospital, with a video posted to social media on Monday showing dozens of ambulances waiting for entry to Melbourne’s Northern Hospital.

The state’s ambulance union said the situation was being repeated at hospitals across Victoria.

“It is very common, that you have that many crews ramped at the Northern Hospital, and any of the other hospitals across the state. We’ve seen it much worse,” Victorian Ambulance Union secretary Danny Hill said.

It is the highest number of calls since the deadly thunderstorm asthma event in 2016, which led to an unprecedented surge in demand for ambulances and 10 deaths.

“This year we’re seeing a significant increase in demand and calls but they’re all standard calls that we would typically take on a day – road traffic accidents, medical emergencies, chest pain, abdominal pain, headaches that kind of thing.”

He said there was a benchmark that 90 per cent of triple zero calls were answered in five seconds but the average wait currently was one to two minutes. One person waited 3 minutes on Monday night.

He encouraged Victorians to call triple zero only “for the most urgent calls” in coming weeks and months, which he said would be “hugely challenging”. Mr Smyth and Associate Professor Stephenson echoed that plea.

Burnet Institute modelling shows Victoria could have between 1400 and 2900 daily cases when the Delta outbreak peaks by the end of October.

At that stage, hospitalisations are forecast to climb to between 1200 and 2500.

With 375 people in hospital with COVID-19 on Tuesday, Mr Foley said frontline healthcare staff were “working like never before”.

“We’ve had, as recently as yesterday, discussions with Ambulance Victoria in a very productive level, as to the measures they’re taking,” he said.

He said plans are in place to supplement the state’s workforce, with parts of the health system being “deprioritised” and partnerships with the private sector being developed “to switch demand from the public sector to the private sector”.

NSW has posted its worst day for coronavirus fatalities yet, with another 15 deaths on Wednesday.

There were also another 863 local cases, the same number as Tuesday.

NSW’s toll from its Delta outbreak has risen to 331, with the deaths of eight men and seven women aged from their 40s to their 90s. They included two people who died at home.

Premier Gladys Berejiklian said case numbers were beginning to fall across greater Sydney, including the hardest-hit areas in the city’s west and south-west. But there is a worrying jump in the regions, particularly in Illawarra and Shoalhaven.

Chief health officer Kerry Chant said the drop across Sydney was pleasing, but “they are starting from a high point”. Suburbs that are still of concern include Greenacre, Merrylands, Guildford, Yagoona, Blacktown and Minto.

“We see increasing cases in the Illawarra and Shoalhaven, around the
Wollongong and Shellharbour area and also we are concerned about Mount Druitt and Auburn. The key message is we also are seeing regional outbreaks,” she said.

NSW will emerge from lockdown in a fortnight after almost four months of stay-at-home orders for large parts of the state.

Also from October 11, two fully vaccinated people a day will again be able to visit people in aged care – something that has been off-limits for about three months.

“This is welcome news and we ask people to exercise a degree of caution. If you have symptoms or you are not well, don’t do it,” Ms Berejiklian said.

Vic cases surge to 950, amid alarm for health system