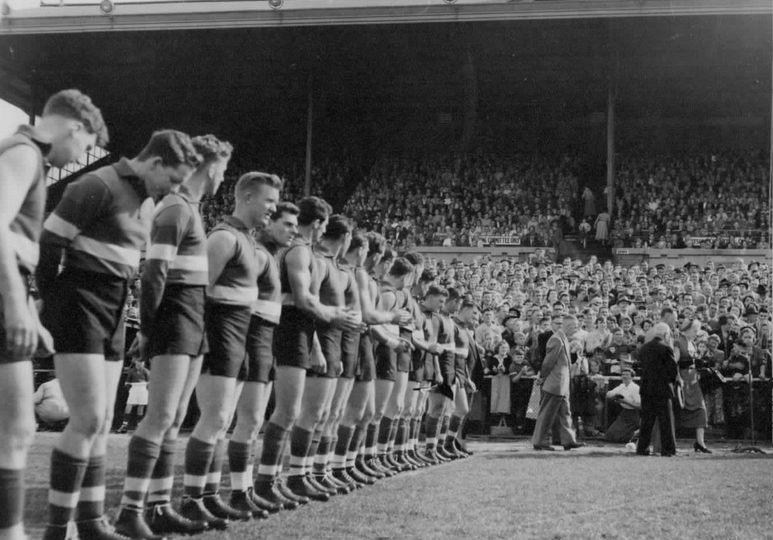 The Bulldogs are facing a re-play of the 1954 grand final, when Melbourne started firm favourites only to be humbled as the men of the West doubled their score, 51-102. Photo: Vic gov archives

Melburnians have been urged not to flock to football heartlands and other supporters’ homes over AFL grand final weekend, with the city’s nightly curfew to remain in effect.

Saturday’s AFL decider was earlier this month relocated from the MCG to Perth Stadium, as Victoria’s COVID-19 outbreak worsened.

It’s the second straight year the blockbuster event, which typically draws a 100,000-strong crowd, has been moved away from Melbourne and both grand finalists – the Melbourne Demons and Western Bulldogs – are again Victorian teams.

With Melbourne trying for their first premiership in 57 years, Victoria’s Chief Health Officer Brett Sutton encouraged fans not to congregate regardless of the result.

“It is those close contacts that put you, your friends and your households at risk. Enjoy your fancy cheese boards or whatever way you want to enjoy it at home.

“Put the barbecue on, but put your iPad up, have your phones on FaceTime, cry and scream and laugh and joke over the internet to connect with friends and family, and enjoy the spirit of the day in full.”

Richmond’s Swan Street was a focal point for Tigers supporters’ colourful celebrations after their drought-breaking premiership in 2017.

With the city still living through its 112-day lockdown, there was minimal activity last year when Richmond beat Geelong in Brisbane to claim their third AFL flag in four seasons.

Melbourne’s curfew had already been scrapped before the 2020 grand final, and it won’t be temporarily suspended for Saturday evening despite the first bounce being scheduled for 7.15pm AEST.

Opposition Leader Matthew Guy said the state government should have repealed the curfew some time ago.

“It’s not based on health advice. I don’t know why it’s there. We could have actually had some family time this weekend, and actually enjoy the grand final,” he said.

Home gatherings remain banned across Victoria, with Professor Sutton saying the “overwhelming” majority of coronavirus transmission in the state is still happening within and between households.

“Do not go to households thinking that ‘I’ll be alright, I don’t have symptoms, it’s just me, it’s just my friends and family, of course I won’t transmit to them’,” he said.