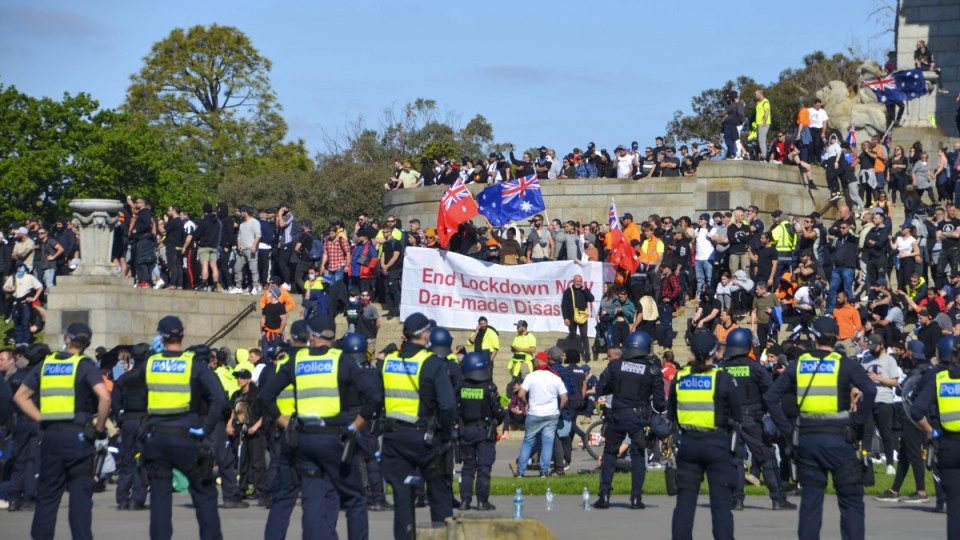 Wednesday's anti-lockdown protest ended in a confrontation at the Shrine of Remembrance, which has been condemned. Photo: Getty

Victoria’s local COVID cases have spiked to a record high and there have been four more deaths, as Melbourne braces for another day of protests.

There were 766 local infections in the state in the 24 hours to Thursday morning – well up on the previous daily peak of 628 for the current outbreak.

It is also the highest number of cases in one day for Victoria since the pandemic began. The previous high was 725 on August 5, 2020.

The latest fatalities take the state’s toll from the outbreak to 20. They were three men and a woman, aged from their 70s to their 90s.

It came amid anger at days of protests across Melbourne following a mandatory vaccination order for construction, and a two-week industry shutdown.

About 300 to 400 protesters again swarmed the Victorian capital on Wednesday, despite stay-at-home orders and repeated warnings from authorities.

Chanting “every day” from the Shrine of Remembrance, hundreds without masks – some still wearing high-visibility clothing – marched through the city to the war memorial.

Heavily armed police surrounded the shrine, leading to a tense stand-off with protesters that lasted about three hours.

Riot squad members appeared to fire tear gas, rubber bullets and other non-lethal rounds when some of the mob became increasingly hostile and refused to leave.

Two officers suffered head injuries after bottles were thrown at them.

Victoria Police Deputy Commissioner Ross Guenther said 215 arrests were made throughout Wednesday, and condemned the occupation of the shine for political purposes.

“It was completely disrespectful that the crowd ended up at the shrine, which is such hallowed ground in this great city,” he said.

RSL Victoria said the mob had disrespected the sanctity of the sacred site, while Shrine of Remembrance chair Stephen Bowater called it “disgraceful”.

Prime Minister Scott Morrison condemned the gathering at the shrine, telling reporters in Washington “the conduct was disgraceful”.

“This is a sacred place, it’s not a place of protest. It was disrespectful and it dishonoured those Australians who have made the ultimate sacrifice,” he said.

“I would hope any and all who were engaged in that disgraceful behaviour, would be ashamed.”

Veterans’ Affairs Minister Andrew Gee said protesters should be condemned in the strongest possible terms and should apologise.

“There can be no justification for this outrage,” he said.

The protests initially began in opposition to mandatory COVID-19 vaccinations for the construction sector and the closure of building site tea rooms, but have since turned into wider unrest.

“Our general observation from the people on the ground was that there weren’t as many tradies involved,” Mr Guenther said.

Police took a more aggressive approach to the mob on Wednesday, after they wreaked havoc on the West Gate Freeway on Tuesday, and have promised to be out in force again on Thursday.

“We will vary our tactics tomorrow. But, of course, my message is don’t come into the city,” the deputy commissioner said.

“I have always been a staunch supporter of the men and women of Victoria Police. I can’t extend that support to the modern incarnation of the Despot’s militia. It horrifies me,” he said.

Fellow Liberal MP Brad Battin responded in a comment underneath the post, saying Mr Finn’s opinion is “not the view of the Liberal Party”.

“The police are delivering on bad laws by a terrible government. The front line can’t choose which laws to follow. As a former police officer I understand what it is like to face protesters – it is not great,” Mr Battin said.