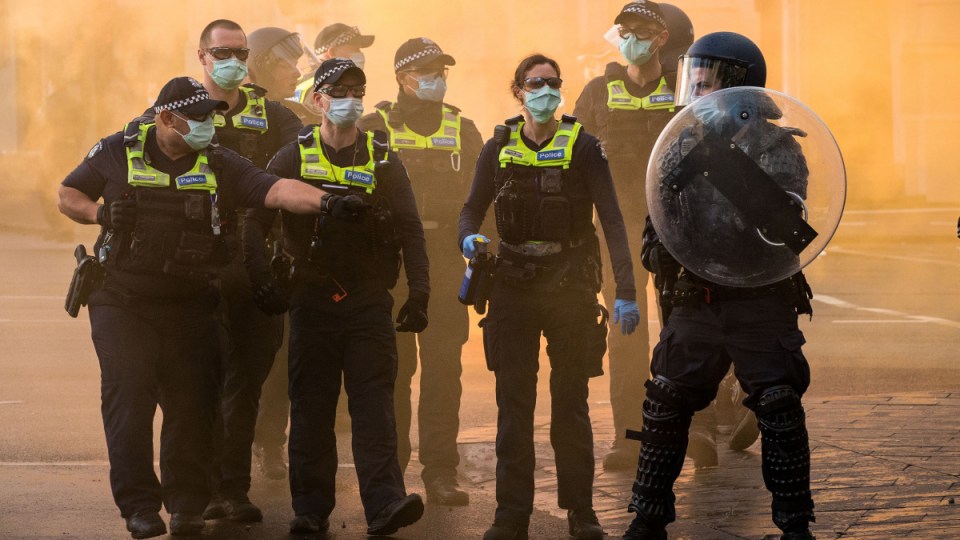 Victoria has confirmed another 603 virus cases and one death, as the state’s construction industry is shut down following violent protests.

Tuesday’s update is the highest daily tally in the current outbreak and since August 2020.

It brings the total number of active cases in the state to 6000.

The death brings the toll from the current outbreak to 13.

On Monday, 48,829 tests were processed and 40,811 Victorians received a vaccine dose at state-run hubs, according to the Health Department.

The latest update came as construction sites across Melbourne, Ballarat, Geelong, Mitchell Shire and the Surf Coast were shut down for two weeks late on Monday, following violent protests outside the CFMEU’s head office in Melbourne’s CBD over a vaccine mandate for the industry.

Industrial Relations Minister Tim Pallas said the shutdown was required to cut down movement, reduce virus transmission and give the industry time to adapt to the new requirements.

“We put the industry on notice just a week ago. We have seen appalling behaviour on-site and on our streets, and now we’re acting decisively and without hesitation,” he said in a statement.

An amnesty will be in place on Tuesday so that a handful of workers can attend construction sites to shut them down safely.

The government said all sites will need to demonstrate compliance with the chief health officer’s directions prior to reopening, including evidence workers have had one dose of a COVID-19 vaccine before they return to work on October 5.

The Property Council of Australia said the shutdown would cost the economy $1.1 billion a week.

“The majority of construction sites and construction workers are doing everything required of them to meet the highest standards of COVID safety and have done so since the pandemic started,” executive director Danni Hunter said.

“Closing the industry will prevent them going to work and getting paid and it will stall projects causing immensely costly delays, putting projects and Victorian jobs at risk.”

“The actions of a few should not be used as an excuse to shut down an entire industry, putting tens of thousands of people out of work,” she said.

Union officials say Monday’s protesters were not all CFMEU members and blamed “neo-Nazis and right-wing extremists” for hijacking the event.

“There was a small minority of construction workers, some of them when it all got violent just walked away from it. It was hijacked by the professional protesters,” the Victorian construction branch secretary John Setka told ABC Radio National on Tuesday morning.

Mr Setka – who was pelted with bottles and abused on Monday – urged the Victorian government to tackle misinformation about the COVID-19 vaccine.

“You just can’t just throw these people out to the walls and say, ‘well, you’re not working because you’ve got a genuine fear over being vaccinated’.”

ACTU president Michele O’Neil told ABC News Breakfast that extremists were using the union movement to create division and spread misinformation but unions would “not be intimidated”.

“The small number of union members that were [at the protest] were, as I said, part of something that is not in their interest and not in any worker’s interest.

“Because misinformation, division and violence is unacceptable.”

An audit of about 200 construction sites on Thursday last week found 73 per cent were failing to comply with health directions.

The state’s roadmap out of lockdown was released on Sunday, detailing small changes to restrictions when 80 per cent of Victorians aged over 16 have received a single vaccine dose.

Melbourne’s lockdown will remain in place until 70 per cent of Victorians are double-vaccinated, which is forecast for October 26.

‘Step change’: Huge lift in online shopping as pets and gardens boost sales
Construction shut down for two weeks in most of Victoria after CFMEU protest
Today's Stories

Victorian cases climb to 603, as construction is shut down