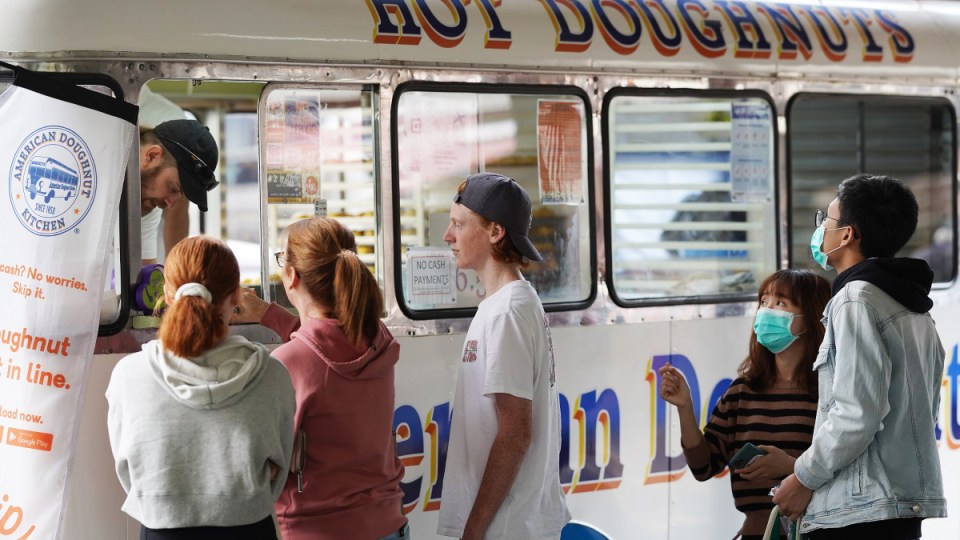 Victoria has posted its first day without local COVID cases since its Delta outbreak began in mid-July. Photo: AAP

Victoria had no new local coronavirus cases on Wednesday – its first “doughnut day” since its Delta outbreak began nearly three weeks ago.

Wednesday’s update came from more than 30,000 tests across the state – and as millions begin to eye eased virus measures from next week.

There were also no cases in overseas travellers, and the state’s active COVID infections has fallen to 99.

The first drive-through vaccination hubs in stadium car parks could be established in mid-August, before being widely used in October.

Jabs at work are slated to start in late September before operating in most states and territories by the end of November.

A retail pilot, which would include shopping centres and supermarkets, could be up and running in October.

Wesfarmers – which owns Bunnings, Kmart and Officeworks – offered its sites for mass vaccination hubs in July, at a meeting with senior government figures.

The ABC is reporting that the Commonwealth Bank and Westpac will set up vaccination clinics for Sydney front-line staff in a program agreed with the federal government. It will start in the eight local government areas hit hardest by the NSW outbreak.

Schools could also be used from December under state and territory government-run programs if experts approve Pfizer vaccine for 12- to 15-year-olds.

The institute’s epidemiology director Jodie McVernon said spread could be reduced across the population with many older people now vaccinated.

“What we’re advising now is a strategic shift to maximise those benefits by moving to younger groups who are key spreaders of infection,” she told ABC radio on Wednesday.

“While maintaining high rates in the over-60s we actually can double the effects of vaccination in that group. We can halve the burden of disease in that group by now focusing on transmission.”

The modelling also shows the benefits of maintaining high quality testing, tracing and quarantine alongside low-level social distancing when 70 per cent coverage is achieved.

In the first 180 days of an outbreak 16 people would die with strong measures in place, while the toll could reach almost 2000 without effective restrictions.

Australia’s leaders are gunning for a 70 per cent target to significantly reduce the prospect of major lockdowns and 80 per cent to all but end city-wide shutdowns.

Almost one-in-five people over 16 have received both doses of a vaccine.

Sydney and surrounds, as well as south-east Queensland, remain in lockdown as health authorities fight outbreaks.

NSW had 199 cases of local transmission on Tuesday, while there were 16 new infections in Queensland taking the latest cluster to 47.