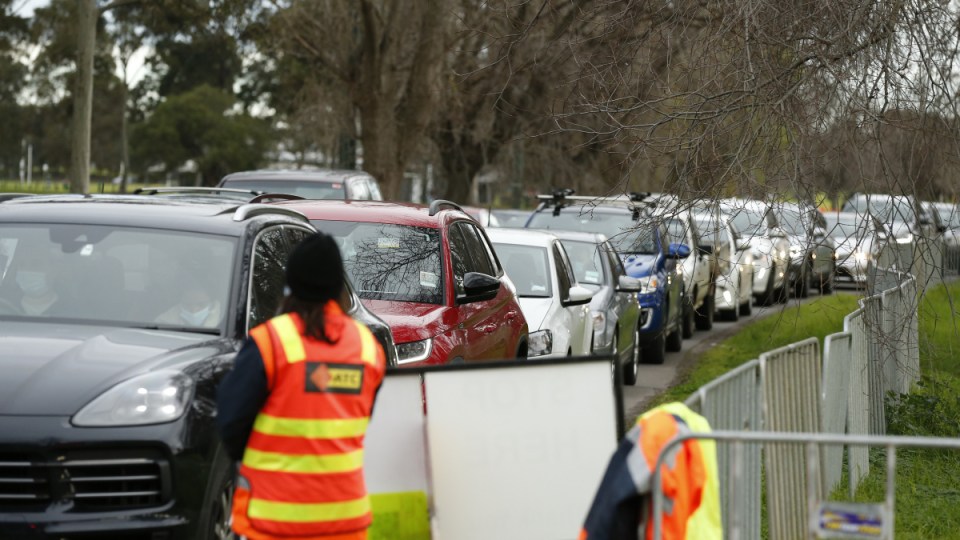 Testing numbers remain high across Victoria, with nearly 50,000 in the 24 hours to Tuesday morning. Photo: Getty

Victoria has confirmed 13 more local virus infections, including one that is a mystery, as millions wait to learn how long the state’s lockdown will be extended.

Also included in Tuesday’s cases are four that were confirmed by Premier Daniel Andrews on Monday.

Twelve of the new cases are linked to existing outbreaks that have spread across Victoria. One remains under investigation.

The results came from nearly 50,000 tests across the the state in the previous 24-hour period.

Mr Andrews is expected to provide a briefing later in the day. He will also outline plans for the Victorian lockdown, which had initially been expected to end at midnight Tuesday.

On Monday, Mr Andrews confirmed it would be extended to buy time for the state’s contact tracers to beat the outbreak of the Delta coronavirus variant.

“It would be perhaps a few days of sunshine and then there would be a very high chance we’d be back to lockdown again. That’s what I’m trying to avoid,” he said.

The latest testing figures and results, as well as any new exposure sites and mystery cases, will guide their decision. Exposure sites across Victoria topped 300 on Tuesday, with more added overnight.

COVID cases are spread across the state, including two in Mildura, in Victoria’s far north-west. Testing commander Jeroen Weimar said on Tuesday no new cases had been identified in the regional city, after a bumper turnout for testing

He said health teams had been sent to Mildura from elsewhere in Victoria on Monday night, to help with testing. More teams would arrive on Tuesday.

“I absolutely understand the frustration around the long queues yesterday and on Sunday. We tested just under 2,000 people over the last couple of days,” he said.

Also on Monday, chief health officer Brett Sutton said no other jurisdiction in the world had been able to keep up with the Delta variant.

“There is no absolute guarantee that we can win against Delta period, we have to give ourselves the absolute best chance,” Professor Sutton said.

“This will take off if we allow it to.”

By late Monday, there were 15,800 close contacts across Victoria.

Elsewhere, Business Victoria has apologised after a “technical issue” meant businesses seeking lockdown support were given an estimated call-back time of up to 17 hours.

A Business Victoria spokesperson said only those who selected the call-back option heard the estimate. Live calls on Monday were answered within 10 to 20 minutes.

An extra 30 call-takers have been put on to cope with high demand and some $180.8 million in lockdown payments to 86,069 businesses had been approved by 2pm on Monday.

Mr Andrews has flagged having “more to say” about possibly expanding the $201.8 million business support package as the state’s fifth lockdown drags on.