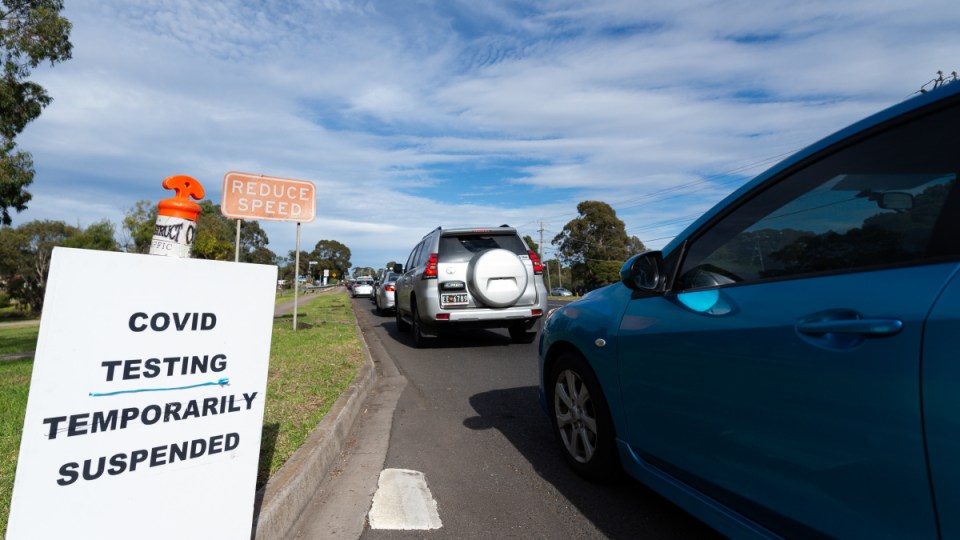 A COVID testing centre in Melbourne's west puts out the closed sign after being overwhelmed with queues. Photo: Getty

Melburnians will remain in lockdown for at least another week as authorities try to halt the worrying spread of COVID across the city.

Acting Premier James Merlino has just announced the much-anticipated decision, which came as the outbreak that sparked the Victoria-wide shutdown reached 60 cases on Wednesday.

“If we let this thing run its course, it will explode. We’ve got to run this to ground because if we don’t, people will die. And if that happens, it’s our most vulnerable,” he said.

“In the end, this is about saving lives.”

There were six new infections in Victoria on Wednesday, from more than 51,000 tests in the previous 24 hours – and 20,500 vaccine doses administered in state-run centres.

Mr Merlino said the virus’ spread meant chief health officer Brett Sutton had “no choice” but to advise the lockdown should continue for the city.

“No one, no one, wants to repeat last winter. To stop that from happening, we need all Victorians to follow the rules, to get tested and to get vaccinated when it’s your turn,” he said.

“We can do this, but we need to do it together.”

The lockdown extension applies to millions in greater Melbourne, with looser restrictions for regional Victoria from midnight Thursday.

There are more than 350 COVID exposure sites across Victoria, including some of the most recent at Glenrowan, Euroa and Anglesea. The state also has more than 5000 close contacts in isolation.

From midnight Thursday, Melburnians will have some looser rules, including widening the current five-kilometre limit for travel to 10-kilometres. Year 11 and 12 students will return to face-to-face learning, while some outside jobs, such as landscaping, will be added to the permitted list.

Restrictions will also change further for regional areas, where life will return to a lot closer to normal.

“Even if all goes well, we won’t be able to have people from Melbourne travelling to regional Victoria during the Queen’s Birthday long weekend,” Mr Merlino said.

“The risk of exporting this virus is just too high.”

Most regional businesses will be able to reopen, with strict caps on customer numbers. Functions such as religious gatherings, weddings and funerals will also return, again with strict caps.

But the state government remains concerned about Melburnians travelling to country areas to take advantage of looser rules. Mr Merlino said the city’s restrictions would travel with them.

“We’ve also seen previous examples of people who left Melbourne, broke the rules and took the virus with them,” he said.

“We do not want to see that happen again, particularly with this variant of concern that is this outbreak.To that end, businesses that are open in regional Victoria but closed in Melbourne … must check the IDs of everyone they serve.”

Of most concern to Victorian health authorities is the amount of “stranger-to-stranger transmission” in the expanding outbreaks. Professor Sutton said there had been repeated transmission of the virus at “casual” tier two and tier three exposure sites.

“At least one in 10 current cases have caught this virus in those casual contact settings – so not the workplace and home close contact settings where we know and expect transmission to occur,” he said.

“We have to reach out to people in some of those exposure sites and ask them to quarantine rather than just test and isolate because of the more contagious strain.”

However, Professor Sutton said he had “great confidence” Melbourne’s rules would be able to ease next week.

“The lockdown is to make sure that we see cases who are already quarantining, like one of the new cases from overnight.”

Mr Merlino also announced a further $209 million in grants to help businesses get through the extended lockdown. It comes on top of $250 million in aid announced last weekend.

State Treasurer Tim Pallas will also call his federal counterpart, Josh Frydenberg, to renew Victoria’s pleas for a “JobKeeper-style” funding package to help workers. Mr Merlino will make a personal plea to Prime Minister Scott Morrison later on Wednesday – and raise the issue at national cabinet on Friday if he is unsuccessful.

“A lot of Victorians, a lot of Victorian businesses are doing it tough right now and it is our clear expectation that the federal government will provide them the support that they deserve,” he said.