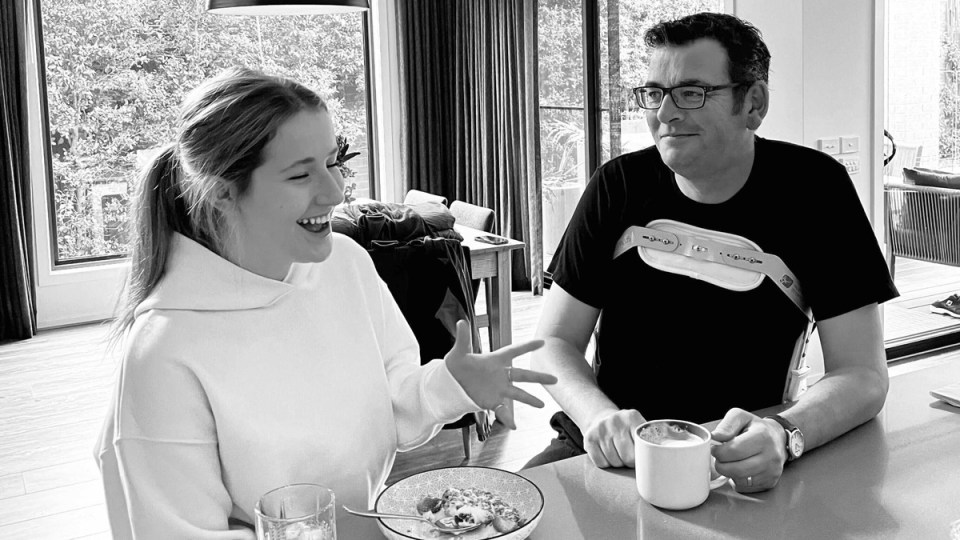 The Victorian Liberals are pursuing conspiracy theories about the injuries that have kept Premier Daniel Andrews, pictured with daughter Grace, off work for months. Photo: Twitter/Daniel Andrews

Victorian Premier Daniel Andrews’ recovery from a fall is progressing well and he is on track to return to work in June, his deputy says.

Mr Andrews suffered at least five broken ribs and an acute compression fracture of the T7 vertebra when he slipped on the steps of a holiday home on March 9.

The 48-year-old was released from hospital on March 15 and has been recovering at home since.

Deputy Premier James Merlino, who has been acting premier in Mr Andrews’ absence, provided an update on his condition on Thursday.

“He’s up and about, so I’m really pleased with his progress. There’s still quite a way to go but he’s doing very well,” he said.

“We’re on track for a June return, that’ll obviously be subject to doctor’s advice.”

He added that the Premier was walking “at a much greater level” than he had been able to in April.

Following the accident, Mr Andrews struggled to walk for more than 15 minutes each day. In his most recent update in April, he said he had been diligent with his physiotherapy and was able to walk for an hour.

Mr Merlino said he has been in regular contact with Mr Andrews and planned to speak with him on the phone later on Thursday.

Victorian Premier on track to return to work in June