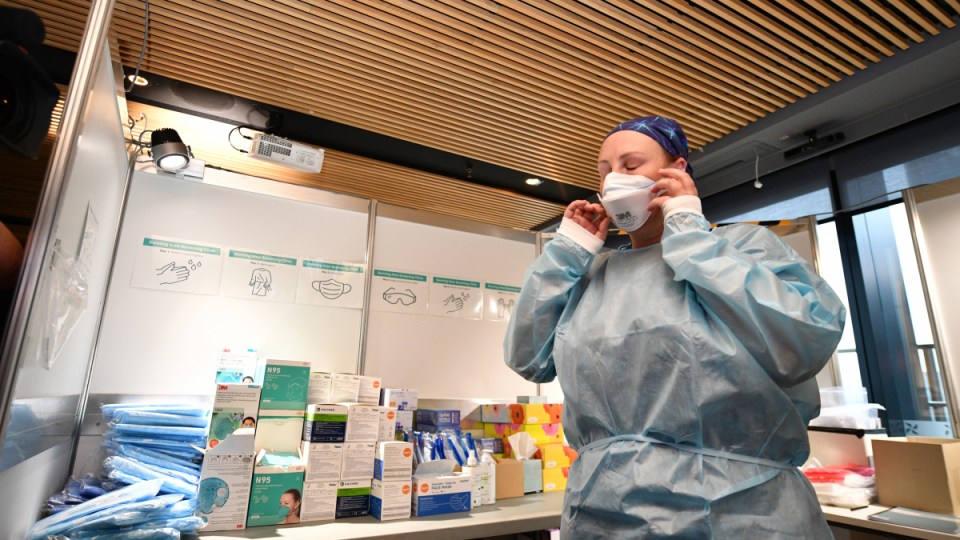 A healthcare worker at the Four Points by Sheraton, which will be one of Victoria's quarantine hotels. Photo: AAP

Sri Lankan Airlines flight UL604 from Colombo touched down about 4.22am on Thursday.

Passengers were taken by bus to the Intercontinental on Collins Street in the CBD, where they will remain for a fortnight.

Victoria’s hotel quarantine program has restarted for a third time, as the state government ramps up its vaccination program.

Sri Lankan Airlines flight UL604 from Colombo touched down at 4.22am on Thursday, with passengers taken by bus to the InterContinental on Collins Street in Melbourne’s CBD where they will remain for a fortnight.

It is expected 106 passengers will arrive in the state on Thursday, with other flights to arrive from Doha, Dubai and Singapore.

All will be staying at either the InterContinental or the Holiday Inn near Melbourne Airport.

The Novotel Ibis Melbourne Central, Pan Pacific, Holiday Inn on Flinders and Element Melbourne Richmond are also ready for use after ventilation works.

The Holiday Inn on Flinders Street will function as a “health hotel”, taking travellers who test positive to COVID-19, while the Element Melbourne Richmond will take guests
with medical conditions and complex needs.

The state hasn’t accepted returned travellers since February 13, when workers contracted the UK COVID strain from guests at the Holiday Inn.

The outbreak, which grew to 24 cases, triggered a statewide five-day lockdown.

Victoria’s deadly second wave last year also leaked from hotel quarantine and led to a judicial review and overhaul of the program.

Under the latest changes, returned travellers will be tested four times, unable to leave their rooms for fresh air without a medical reason, have their mealtimes staggered and large family groups will be spaced out to reduce the risk of aerosol transmission.

Hotel quarantine staff have all received at least one dose of the Pzifer vaccine, while 46 per cent have received their second. The majority have also undergone N95 mask fit testing.

It comes as Acting Premier James Merlino and Health Minister Martin Foley announced a target of 300,000 vaccination doses by May 16.

Two new vaccine hubs will be established at the Royal Showgrounds and the Mercure Convention Centre in Ballarat to help reach the new target.

Community vaccination centres will also be set up in Broadmeadows, Deer Park, Lilydale, Prahran and West Melbourne for public housing residents included in phase 1a and 1b.

Mr Merlino said the state has met all of its vaccination targets so far and could further assist the federal government if needed.

“We stand ready and willing and able to broaden our program and help the Commonwealth, with additional cohorts of people,” he said.

“But that’s a decision that the Commonwealth needs to make, and we need to make it in a nationally consistent way.

“It’s not appropriate that, depending on where you live around the country, you get a different approach in terms of the rollout of the vaccinations.”

Four million Australians were due to have jabs by the end of March, a target missed by more than 3.3 million, with the federal government blaming a lack of supply.

Infectious diseases expert Ben Cowie, who is advising the Victorian government on the vaccine rollout, said the state had been promised 40,000 doses this week.

“Unfortunately, I don’t believe that they’ve been delivered as yet,” he said.