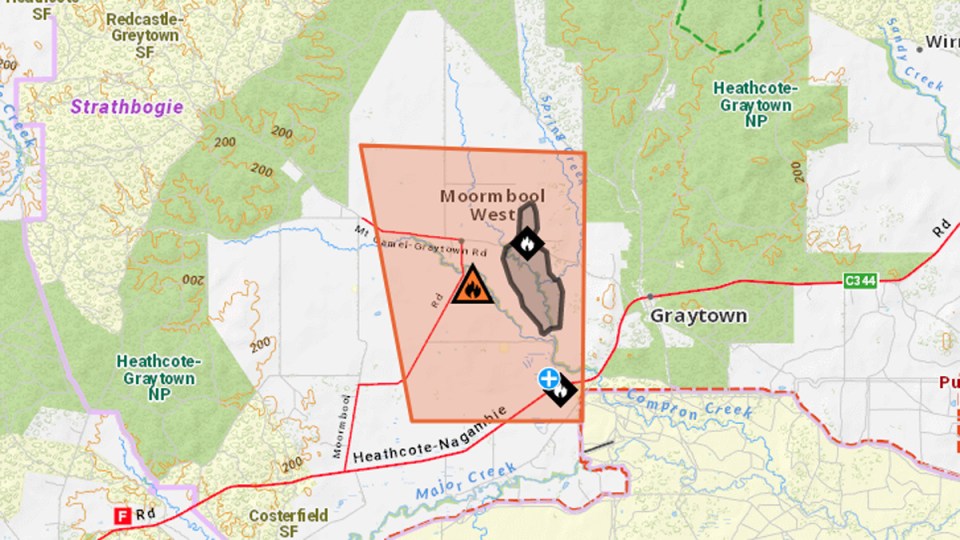 The fire had grown to 170 hectares and was still not under control on Tuesday afternoon. Photo: Twitter

An out-of-control grassfire north of Melbourne has destroyed sheds and burned more than 100 hectares of land.

Firefighters were battling the blaze after it started in a paddock about midday on Tuesday at Graytown, a deserted Victorian gold mining township east of Bendigo.

They have saved several houses but hay and machinery sheds were lost.

The blaze, which has grown to 170 hectares, has prompted a watch and act alert for Graytown and Moormbool West as it moves north.

“If you are away from home, do not return,” the Vic Emergency warning said.

“If the situation changes you will need to leave quickly. Plan to take your pets, medications, mobile phone and charger.

“Travel to the home of family or friends that are away from the warning area.”

There are 22 Country Fire Authority vehicles on site along with water aircraft and crews have been sent to Mount Camel-Graytown Road, where the fire crossed, to protect assets.