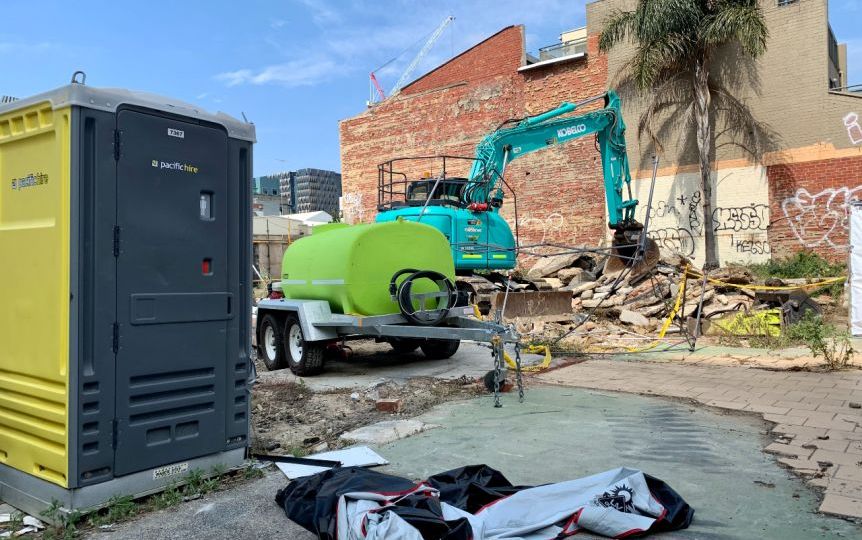 The site remains a mess today, more than four years after the pub's demolition. Photo: ABC

Developers who demolished a historic Melbourne pub have been jailed for a month and ordered to pay more than $400,000 in fines and legal costs.

Raman Shaqiri and Stefce Kutlesovski illegally demolished the Corkman Irish Pub in Carlton in 2016, and were sentenced after being found guilty of contempt of court by the Victorian Civil and Administrative Tribunal.

The Melbourne City Council and state government sought to have the men held in contempt for failing to comply with VCAT orders, which compelled them to clear the site so it could be transformed into a public park.

The men had previously pleaded guilty to breaching building and planning laws when they knocked down the 158-year-old pub.

For that, they were fined more than $1 million and also found themselves subject to legal action brought by the council and the Victorian government.

At Wednesday’s VCAT hearing, the men were fined $150,000 and ordered to pay $250,000 in legal costs to the state government and the council.

The men’s lawyer, Matthew Franke, said his clients were “extremely surprised” by the sentence and would seek leave to lodge an appeal.

“The company and its directors are surprised and disappointed by the tribunal’s findings, particularly in circumstances where the prosecutors in this case did not seek a term of imprisonment, and stated in written submissions that the imposition of such a sentence would be ‘manifestly excessive’,” he said in a statement.

‘They have trashed Victoria’s heritage’

The state government had originally wanted the developers to rebuild the Corkman, but that plan hit a snag when an enforcement order to do so was deemed “not legally sound”.

The Corkman Pub, formerly known as the Carlton Inn Hotel, was built in 1858. Although it was not on the Victorian Heritage Register, it was covered by heritage rules.

It was demolished over a weekend in 2016, a week after a fire was lit inside the building.

“They have trashed Victoria’s heritage, refused to build a park, and shirked their legal obligations at every step,” he said.

Opposition planning spokesman Tim Smith also backed the VCAT sentence and called on the state government to seize control of the property.

“The Andrews Labor government must compulsorily acquire this site and turn it into social housing, public housing, or a permanent park so these cowboy developers don’t make a cent from their illegal activity,” he said.

Lord Mayor Sally Capp said the council and government pursued the developer “in the public interest”.

“Today’s decision vindicates the court’s authority and sends a clear message that we won’t tolerate developers disobeying a court order,” she said.

“We look forward to seeing the site cleaned up and available for the public to enjoy.”

Jail for developers who knocked down historic Melbourne pub