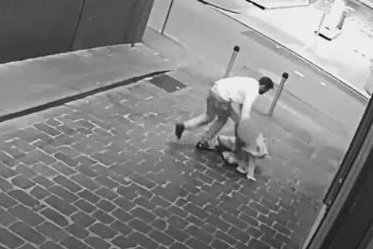 A suburban footballer seen on security footage dragging a woman down a Melbourne laneway and pinning her to the ground will not be jailed.

Jackson Williams, 21, instead left Victoria’s County Court with a two-and-a-half year community corrections order over the “violent and random” attack that left his victim so shaken that she moved away from Victoria.

“What you did shattered her sense of confidence, security and safety,” Judge Mandy Fox said in sentencing on Wednesday.

“She screamed and did her best to resist you but you were much bigger and stronger than she was.

“You had a hand over her mouth in an attempt to silence her.”

Williams will have to perform 200 hours of unpaid community work and has been ordered not to go to any licensed premises for six months.

The 21-year-old, whose IQ borders on impaired, was found guilty of common assault, but was acquitted of the more serious charge of intending to sexually assault the woman in the 2018 incident.

But a petition demanding that verdict be appealed has already collected more than 60,000 signatures.

In October 2018, the 39-year-old woman was walking to work at a Melbourne hospital when Williams grabbed her from behind, put his hand over her mouth and dragged her into Brights Place.

Security footage from a nearby restaurant showed the woman stumbling and Williams on top of her, pinning her to the ground.

The tape showed Williams, who initially had her in a headlock, holding his hand over the woman’s mouth.

Williams, pleaded not guilty to intending to sexually assault the woman, but guilty to assault.

“She said she couldn’t manage to stand straight and he was really strong,” Judge Fox said in an earlier hearing.

“She said she didn’t know how long he was on top of her.”

The attack was interrupted by Adrian Woodgate, an off-duty New Zealand detective, who was in Melbourne on holiday with his wife and children.

He intervened and yelled at Williams, who fled.

On Wednesday, the County Court heard that Williams wrote a letter to his victim in March and repeatedly apologised.

“You have expressed shame and remorse,” Judge Fox said.

She said that since the security footage of the attack was released, Williams had received racial abuse and death threats.

The home he shares with his grandparents was also attacked by a group of people with baseball bats.

Judge Fox said Williams had been subjected to “extra-curial” punishments.

“You’ve been the recipient of punishments well beyond those required or permitted by law,” she said.

But the judge said that the public humiliation that Williams has been subjected to was a consequence of his own actions.

“You have been disowned by your football club,” she said.

“Friends have abandoned or shunned you.”

Footballer who attacked woman in laneway given community corrections order