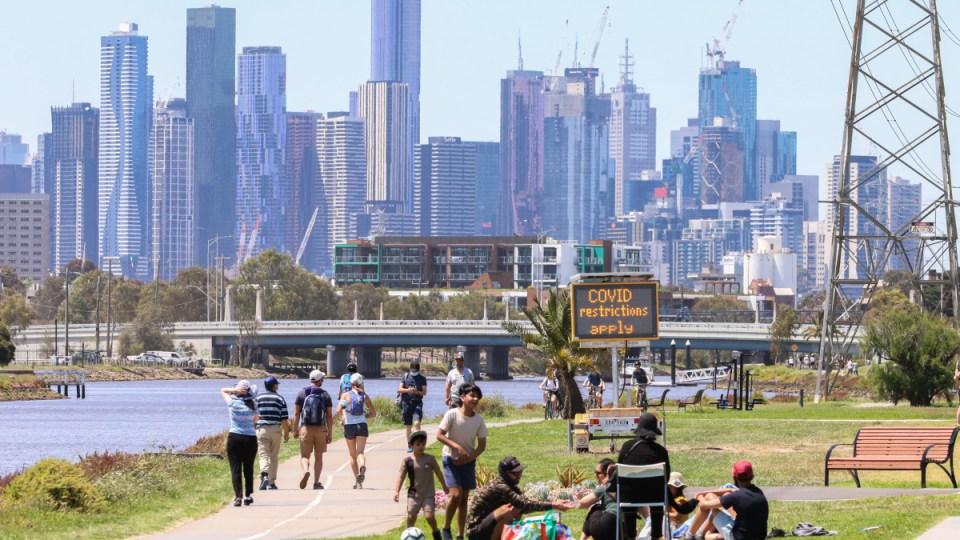 Victoria is on track for further easing of restrictions. Photo: Getty

Victoria will join the trans-Tasman bubble from Monday with flights from New Zealand allowed to land in Melbourne after the state recorded a full week of no new coronavirus cases or deaths.

The state has recorded a week of ‘double doughnut’ figures, driving metropolitan Melbourne’s 14-day rolling average down to 1.3 cases while the city’s mystery cases remain at two.

The state is on track for further easing of restrictions on Sunday.

New South Wales, meanwhile, announced four new community COVID cases as a Southern Highlands school was closed and will conduct online learning due to a possible case of COVID-19.

Moss Vale Public School on Thursday night said in a statement the person was seeking testing, and their results would be confirmed later on Friday.

All students and staff have been advised to self-isolate until the results are known.

Premier Daniel Andrews will announce the further relaxation of restrictions on Sunday, including an end to the 25-kilometre travel radius limit and the border between metropolitan Melbourne and regional Victoria.

In addition to the easing of local restrictions, Mr Andrews said on Friday that he had written to Prime Minister Scott Morrison to inform him that Victoria would join the trans-Tasman bubble.

“Whilst we inadvertently found ourselves in the bubble … New Zealanders will now be able to travel directly into Melbourne,” he said.

“Now’s the time, because cases are so low and we’re opening up, we can have flights directly into our city and our state. There will be no quarantine.”

“In so many parts of the world, this virus is completely and utterly out of control … the chance that those people (from different countries) are returning with the virus is a higher likelihood than it’s ever been.”

The latest announcement comes as the inquiry into Victoria’s COVID-19 hotel quarantine program is set to hand down interim report, paving way for return of international travellers.

The report will outline key recommendations for a new isolation scheme for travellers, which could see international arrivals return to Melbourne Airport within a month.

Opposition Leader Michael O’Brien pointed to diminishing active cases as a reason for the Premier to realign rules closer to those enjoyed north of the border.

“Victoria has got even lower numbers and yet our lives are so much more locked down.”

The Victorian government has already committed to lifting capacity limits at Melbourne hospitality venues to 40 patrons indoors – 10 per space – and 70 outdoors.

Mr O’Brien argues density limits should be based on the size of each venue rather than an “arbitrary number”.

“That is the difference for a lot of small businesses between opening and closing, between living and dying,” he said.

Elsewhere, NSW residents can now freely travel to the Apple Isle after Tasmania opened its border to Australia’s most populous state for the first time in more than seven months.

The NSW-Tasmania travel change, meanwhile, came into effect on Friday and removes the need for people travelling south from NSW to quarantine.

NSW Premier Gladys Berejiklian on Thursday ramped up the pressure on her interstate counterparts in WA and Queensland to follow suit in order to avoid the “devastating impact” of job losses next year.

This followed her announcement that from November 23 NSW will be open to people from Victoria.

Ms Berejiklian appealed to Queensland Premier Annastacia Palaszczuk and WA Premier Mark McGowan to put the national good first, saying “we have to rely on each other in Australia to the short and medium term”.

NSW Health said while the state had low numbers of locally transmitted COVID cases, the upcoming holiday period would present the challenge of increased social and community gatherings.

NSW Health on Thursday also called on people from southwest Sydney to get tested if they develop COVID-like symptoms after traces of the virus were found in sewage in the area.

“Fragments of the virus that causes COVID-19 have been detected in samples taken on 4 November from the sewerage system that drains parts of Leppington, Catherine Field, Gledswood Hills, Varroville and Denham Court,” NSW Health said in a statement.