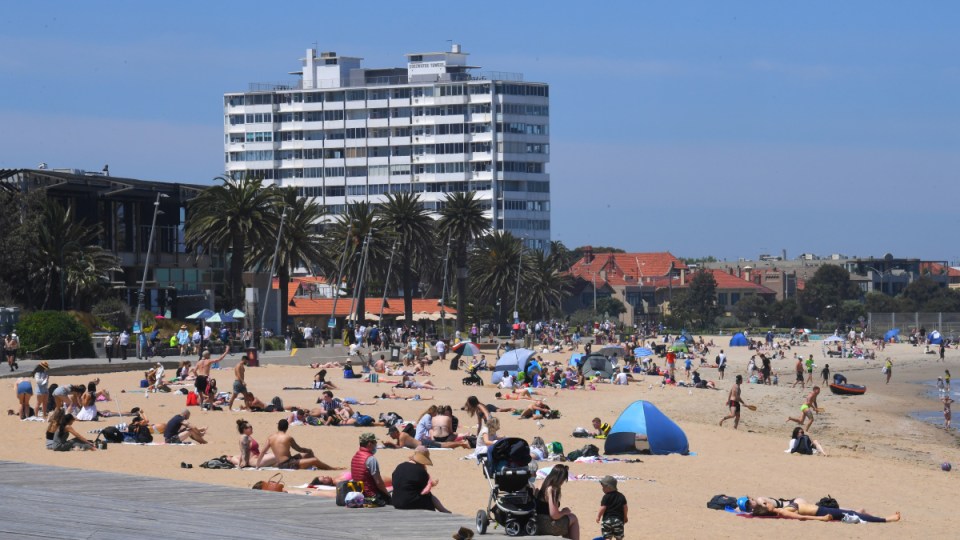 Thousands also flocked to beaches in St Kilda, Brighton and Williamstown, with many flouting orders to wear masks unless in the water. Photo: AAP

Victoria has recorded no new coronavirus cases and no lives lost in the last 24 hours.

It is the fifth consecutive day no new cases and no deaths have been reported.

The 14 day rolling average is now 1.7, while there are two cases with an unknown source.

Regional Victoria has not recorded a new case in more than a fortnight.

The latest figures come as the state’s active COVID-19 cases dipped below NSW’s, with hopes rising for a “COVID-normal” summer.

Active cases dropped to 38 on Tuesday – the lowest since March 13.

Health authorities, however, believe there are still undetected cases in the state.

Victoria’s Commander of Testing Jeroen Weimar warns of a “long road ahead” before the state can return to “COVID-normal”.

“We’re not over this by any means,” he told reporters in St Kilda on Tuesday.

“We’ve got a long way to go to make sure we identify any remaining areas of transmission.”

Mr Weimar said there are “absolutely” more undetected cases of COVID-19 in the community.

“It’s our job to be really vigilant,” he said.

He encouraged anyone with a runny nose, sore throat or any other COVID-19 symptoms to get tested.

The state’s virus death toll remains at 819 and the national figure at 907.

Thousands crowded onto beaches yesterday as Melbourne marked its first official public holiday out of lockdown.

With Flemington Racecourse closed to punters for the 160th running of the Melbourne Cup, pubs and bars filled up quickly amid cap limits of 50 people outdoors and 20 indoors.

Police were out in force at an anti-lockdown protest outside parliament house in Melbourne.

There were 404 protesters arrested, with a female senior sergeant taken to hospital after suffering a suspected broken arm.

Another 395 fines will also be handed out for a range of offences including assaulting police and coronavirus rule breaches.